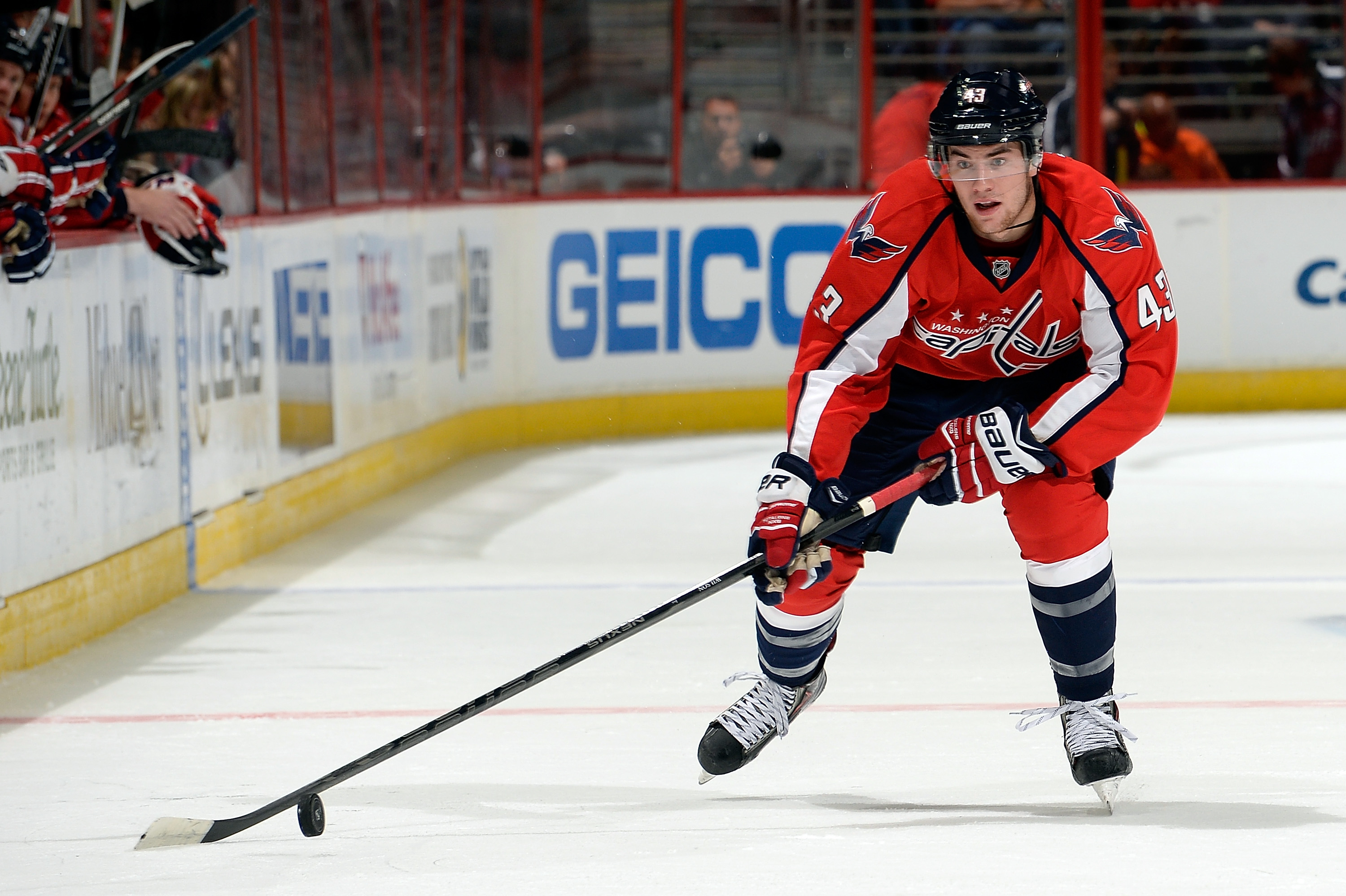 As a first round pick (16th overall) in the 2012 NHL draft by Washington, right winger Tom Wilson came into the Capitals’ system with high expectations.

“I think that’s probably the best day of my life so far,” says Wilson. “It was a long wait. It was probably two hours on that Friday night until my pick and I was just trying to keep my emotions collected and stay calm, and then when I got picked it was obviously a huge honour.”

At 6-foot-4 and 210 pounds, he has all the makings to be a successful power forward in the league. He electrified GTHL fans with 44 goals and 105 points in his final season with the Toronto Jr. Canadiens. A second round selection of the OHL’s Plymouth Whalers in 2010, Wilson steadily improved each OHL season, recording six, 27 and 58 points, while topping 100 penalty minutes in each of his final two seasons. He also added 30 points in 25 playoff games for Plymouth the past two years.

“That was really surprising. I wasn’t really expecting to make my debut in Game 5 of the Stanley Cup playoffs and I would never have dreamed that as a kid,” he said. “I haven’t seen the Verizon Centre like that since and it was definitely a great first taste of the NHL.”

This year, the 19 year-old Wilson has been a fixture in the Caps’ lineup, and has met all expectations according to Washington head coach Adam Oates.

“He’s been really, really good. He’s a young kid and gives everybody enthusiasm. When you have that in your locker room, all the other guys are like a big brother to him,” said Oates. “When I watch him on a night-to-night basis, I look at him like a player and I forget his age. When he makes a mistake it’s like a five-year pro making a mistake. It’s not a kid making a mistake.”

Those three playoff games against the Rangers are a big reason Wilson has felt comfortable with the team this year.

“I knew the guys coming in this season and I knew the facilities and there weren’t the little things that I had to worry about.”

On November 5th, Wilson hit a new milestone in his hockey career, recording his first NHL goal and assist, in a 6-2 win over the New York Islanders, where Wilson was named the game’s third star.

Wilson says both pucks are off being framed right now for a plaque celebrating the big game. He says there was no better feeling in the world than seeing his first goal go in.

Another great feeling was buying his very first car, a Jeep Grand Cherokee SRT8 with his first big paycheque.

“It’s a little late. I hadn’t bought a car yet so that was my first car. I kinda went all out. I saved up and then I blew it. It was fun.”

Asked about his earlier years in the GTHL, Wilson credits the league for giving him a strong foundation to grow upon, and says he still remains in contact with several players and coaches from those days. Some of his fondest memories are playing in the GTHL All-Star Game and competing in the final during his minor midget year.

“I spent my younger years coming up in that league,” he said. “It has an incredible amount of great coaches, great players and is the best minor league in the world for a reason. There’s unlimited support when you’re trying to learn stuff.”