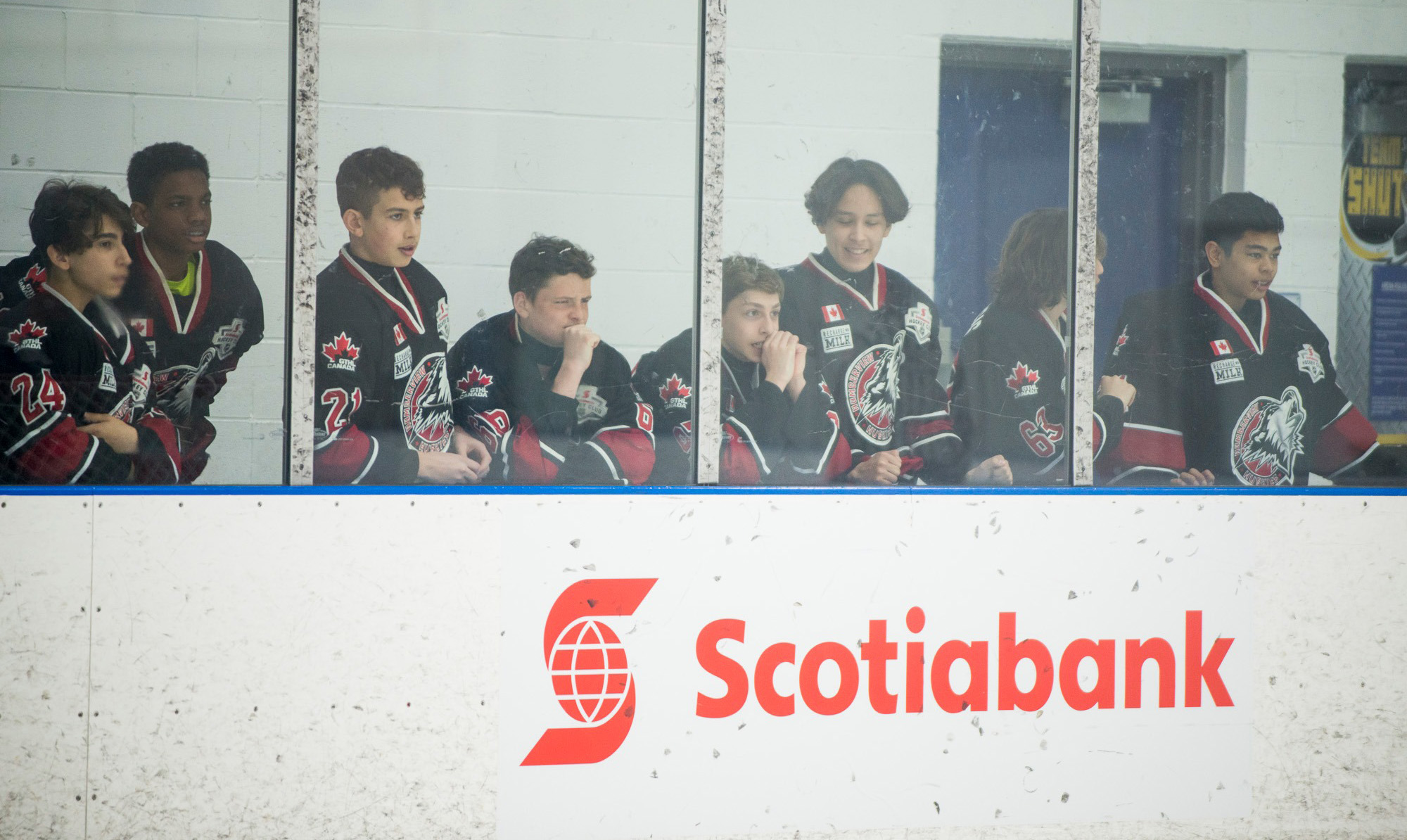 On March 13, 2020, Hockey Canada put a halt on minor hockey across the country to help prevent the spread of COVID-19. Since then, Hockey Canada has allowed provincial hockey branches to work with local health authorities to determine the best return-to-play framework for their province.

The return to hockey in Ontario and across the GTHL will be done slowly and under the guidance of local health authorities. The frameworks and policies established will ensure players, parents, coaches, and volunteers are kept safe.

In alignment with Hockey Canada’s Safety Guidelines and the Ontario government’s Guidance for facilities for sports and recreational fitness activities during COVID-19, the GTHL has developed a return-to-hockey framework specific to our circumstances here in the GTHL. The Game Plan is a fluid and living document that will require revisions as we move into the fall and throughout the 2020-21 season.

Click here for all GTHL news related to COVID-19 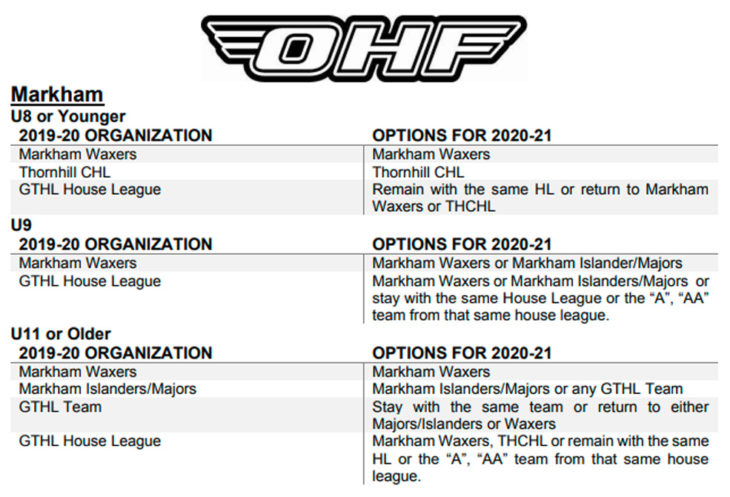 (September 3) Q- Game Plan refers to team activity of no more than 20. Does this include coaches?A→  No. It is referring to 20 players plus bench staff.

(Added August 25) Q- What will the registration process be and how does it work?
A→ House Leagues will continue to register players online as in the past. “A”, “AA” and “AAA” players will first register directly with the GTHL. The Club they will be participating with will then be able to add that player to the Team.

(Added August 4) Q- What needs to happen before the GTHL allows teams to get back on the ice?
A→ The GTHL is working on a plan which will outline what steps and precautions teams will need to take when activity in the GTHL is permitted. This plan will be released within the coming weeks and will act as a roadmap for return to play.

(Added August 4) Q- Is Doug Ford going to be the person who decides when my son goes back on the ice?
A→The GTHL will be taking guidance from health care professionals as well as guidelines laid out by the Province as the League begins to return to play.

(Added August 4) Q-  My daughter has been told she can begin to play hockey, but my son can’t.  What is that all about?
A→The Ontario Women’s Hockey Federation (OWHA) has sanctioned activity for their players at this point in time and their players are allowed to participate in activities outlined by the OWHA. The GTHL continues to work on their plan for return to play.

(Added May 7) Q- Would hockey be deferred/delayed until a vaccine is available and distributed to all?
A→ This will be a determination made by Federal and Provincial Authorities along with the Hockey Canada Board, Ontario Hockey Federation Board and the GTHL Board.  These decisions will all be guided by requirements and recommendations of the health authorities.

(Added August 17) Q- How do I post in players wanted?
A→ E-mail your Club with the information you need  posted and the Club will post it to the GTHL portal.

(Added August 15) Q- How do I find a team if there are no tryouts?
A→ Teams looking for players will have the option of posting it on the GTHL website under “players wanted”.

(Added August 15) Q- How will the coach know what kind of player they’re getting since there are no in person tryouts?
A→The coach will have to make a decision based on the players prior playing experience.

(Added August 15) Q- I don’t have a team. How can I find one?
A→Teams looking for players will have the option of posting it on the GTHL website under “players wanted”.

(Updated September 21) Q- I played in the GTHL last year as an import. Can I continue to play in the GTHL?
A→U10 to U13 players can stay with the organization they were with during the 2019-20 season or return to their home center. Players U14 and up can play for any GTHL organization or return to their home center. Markham residents should refer to the Markham residency rules above.

(Added August 26) Q-I have a U10 player who participated in the NYHL last season but lives in Brampton. Can he play on a GTHL U10 team?
A→ No he must return to his home center.

(Added August 16) Q- I played in the OMHA last year and want to play in the GTHL last year as an import. Is this allowed?
A→ No new imports are allowed in the GTHL unless their home center does not offer programming.

(Added September 2) Q-What protocols can I expect at the rink and what may I need to do differently?
A → Each facility is unique so you can expect different protocols at each location.  All protocols mandated by Public Health Guidelines including the need to social distance and the requirement to wear a mask will be followed.

(Added September 2) Q- The Ontario government has mandated that 50 people can congregate indoors so why is the GTHL restricting it to 20?
A→ The facilities used by GTHL organizations often have shared entrance and exits as well as shared gathering places.  Limiting traffic in buildings will make it safer for all participants. Starting with smaller groups will also allow for participants to get used to new protocols in smaller groups.

(Added September 2) Q- What happens if there’s a case on my team?
A → The Local Public Health Authority will provide direction to the participant, team, Association and GTHL on what steps are necessary.

(Added September 2) Q- What happens if someone on my team has been in contact with a case and didn’t know?
A → They should contact the local Public Health Authority and take directions from them.

(Added September 2)Q- What’s a Team Safety Rep?
A → The Team Safety Rep is there to support the Team Officials, Players and families in complying with the GTHL Game Plan protocols.

(Added September 2) Q- Does every Team need a Safety Rep?
A →Yes.

(Added September 2)Q- Do I need to be a registered bench staff to be a Team Safety Rep?
A→No, but you need to be registered as an Off-Ice Volunteer.

(Added September 2)Q- Who is eligible to be a Team Safety Rep?
A→The Team Safety Rep will be appointed by the Association and Team. There are no prerequisites to fill this position as long as the individual completes the necessary training.

(September 9)  Q- I took the Development 1 clinic last year and am looking to become certified this season. I need to have someone come to my practice for an evaluation, what is the process this season?
A→ The GTHL Development 1 certification process, which includes in person practice evaluations, will be put on hold until September of 2021.

(September 3) Q- What qualifications do I need to coach this season?
A→ Please visit the Bench Staff Requirements for 2020-21 page for more information.

(Added June 30) Q- Can I go out on the ice with my players if I’m a Licensed Hockey Canada Skills Instructor?
A→ Yes. This would give you insurance under Hockey Canada.

(Added May 7) Q – Considering the financial strain placed on families by the loss of income and deferred payments, has the GTHL considered ways to make competitive hockey more affordable for the 20-21 season?
A → The GTHL has formed a working group comprised of Board, Club and staff representatives. This group will be looking at best practices that could be implemented to assist in lowering the expense to parents and families

Questions on the Cancellation of the 2019-20 GTHL Season

Q- My daughter is on a team that has a chance at a GTHL championship.  I know that Hockey Canada has shut down hockey for the season, but I still hope that there might be a chance that hockey will go on, especially for playoff teams.  Is that possible?
A→No, hockey for this season is over.

Q- What does this mean for non-sanctioned hockey leagues?
A→Non-sanctioned leagues operate outside of Hockey Canada’s bylaws and regulations. If they continue to operate, they would be doing so of their own accord.

Q- If one of our players tests positive who should we report to?
A→You should report this to the GTHL Office (Scott Oakman or Michelle Fata) and advise the other players and team officials from the team.

(Updated March 18) Q-Is the GTHL office closed for the foreseeable future?
A→Right now the GTHL office is closed to the general public and staff are working from home. Please leave a voicemail or e-mail staff if you wish to reach them.

Q-How will playoff finals be addressed.  No winners no losers?
A→The season is over. The League will not be declaring any Playoff winners.

Q- My daughter was playing on a team that was in the playoffs.  The season was shut down by the league.   So I get a refund?
A→This is a decision that will be made by the organization where your daughter played. Please contact them for more information.

In addition to protocols outlined in the GTHL Game Plan, each facility will have their own safety measures in place. Please review before heading to the rink to ensure participants follow proper protocol. Not all arenas have their protocols listed on their website. Visit the arenas page on the GTHL website if you wish to call ahead. 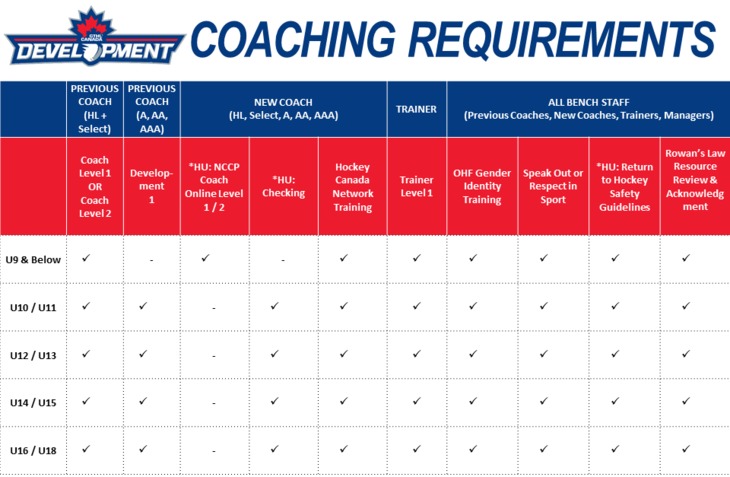 The GTHL will be following Ontario Hockey Federation (OHF) requirements for coaches entering the 2020-21 season. The outlined requirements will be for all coaches (house league, select, A, AA, & AAA) who wish to be rostered to a team. Previously trained coaches may already have many of these requirements.

We anticipate that in the 2021/2022 season we will be able to provide full clinics similar to what we have previously provided either in-person, online, or in combination. 2020-21 coaches will be required to have the appropriate in-class clinic training when requirements revert fully back to normal. Coaches will have until October 7th to complete the requirements.

From the Video Room

The GTHL will be posting regular video updates to address questions surrounding the return to hockey. This update was recorded by Peter Kourtis (General Manager) and Scott Oakman (Executive Director and Chief Operating Officer) on July 23, 2020.