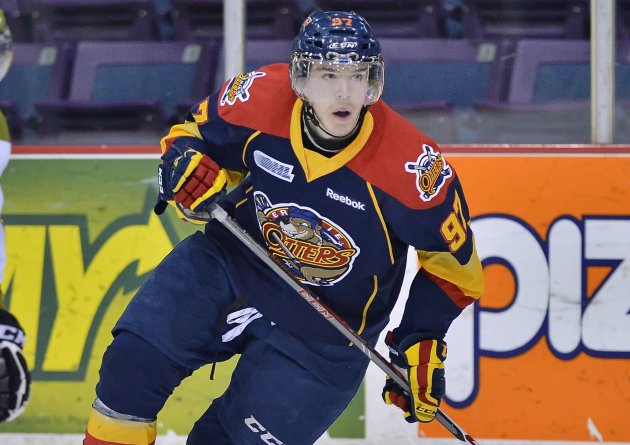 “Have you seen him play? He’s just so fast. That’s the thing that sets him apart from the rest: his speed and determination,” says Ontario-based linesman, James Bradshaw, when talking about Phoenix Coyotes’ first-round draft pick and GTHL alum, Max Domi.

Tim Bernhardt, assistant director of scouting for the Phoenix Coyotes, also refers to that passion as a key to success.

“It’s in you or it’s not in you,” he says. “It’s either you have that passion and desire or you don’t. I think that’s something you’re born with. It’s in your blood.” According to Bernhardt, that passion runs rampant in Max Domi along with GTHL wonder kid Connor McDavid and Erie Otters’ newest asset, Toronto Marlboros’ Dylan Strome.

Being the son of NHL veteran Tie Domi, it should come as no surprise that his son Max was the first-round draft pick of the Phoenix Coyotes, who signed him to a three-year, entry-level contract.

Coming from the Don Mills Flyers, Domi has played the last two seasons for the London Knights, where he helped his team capture back-to-back OHL Championships. His stats and accomplishments surpass many players his age. Thirty-nine goals and 87 points in 64 games this past season, a team-high 32 points in 21 post-season games, a bronze medal with Canada’s World U17 Hockey Challenge, a gold medal with Team Canada in the U18 Junior World Cup and an invitation to play in the CHL Top Prospects game this summer.

However, numbers are just what Domi offers on paper. Todd Cordell, co-owner of Thehockeyguys.net, references the same skating ability that Bradshaw mentioned.

“Domi’s stride is explosive … He has an incredibly high top speed and it doesn’t take him long to reach it,” he says. “He’s extremely shifty and is very good with stops and starts and at cutting strides.”

As long as his confidence and tendency to show off doesn’t get in the way of that innate playmaking ability, little should stop his success this year whether he opts to head back to London for the season or make the leap to Phoenix.

As for “hockey’s next big thing,” McDavid has quite the reputation to live up to. Only the third player to be given exceptional-player status (Sean Day has since been added as a fourth and selected by the Mississauga Steelheads) since John Tavares and Aaron Ekblad, he was granted permission to be selected at the age of 15 in the OHL priority selection.

He was GTHL player of the year in 2012 – recording 33 goals and 39 assists for 72 points in 33 games during his last year as a Toronto Marlboro. The Erie Otters took him in the draft. Erie head coach, Kris Knoblauch, explains, “Connor uses his speed to his advantage, he is very quick and agile. He has a very promising future and I would be very surprised if he is not in the NHL at some point. His hockey IQ and playmaking abilities are exceptional.”

Says Bernhardt: “[He] is the game’s next superstar. I’ve seen him play probably a dozen times in the last couple years and he’s phenomenal. He played with some of the best ‘95s in the country last year, they won a gold medal [IIHF World U18] and he was voted the best player of the tournament, and he’s a ’97.”

After becoming the OHL’s 2012-13 Rookie of the Year, McDavid was recently seen playing against some of the NHL’s biggest names at the annual Biosteel Camp. Despite being the youngest player on the ice once again, he managed to nab a goal and simultaneously impress NHL players such as Joel Ward and Wayne Simmonds.

Ward was heard saying, “His skill-set is unbelievable.” Said Simmonds: “He’s got the hands, he’s got the speed. He’s got the smarts and vision. He’s going to be a great player.”

Joining McDavid on the Erie roster this season is newcomer Dylan Strome. Knoblauch says, “Dylan is able to use his size to protect the puck so he gives himself a little more time to make plays.”

Bernhardt also refers to Strome’s size (6-foot-2, 170 pounds) as being one of his biggest assets. “He was a high pick going into the OHL this year, and although I don’t know as much about him, I have seen his brother [Ryan Strome, drafted 1st round by the New York Islanders in the 2011 NHL entry draft] play for years and they say Dylan’s a little bigger and a little more physical. It seems he’s going to be a really good player.”

When you combine Strome’s physical force and McDavid’s speed and impressive game IQ, the possibilities for this duo promise to be exciting.