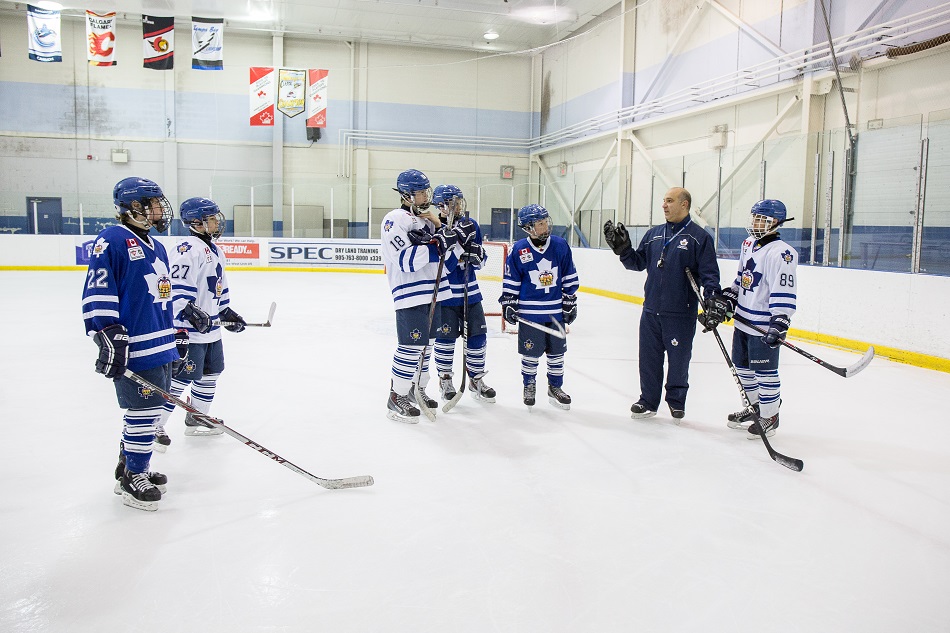 For coaches and players, one must understand that the reason for body checking (starting at minor bantam) is to separate the player from the puck, and regain possession. This is the prime reason for having the skill of checking in the game. Understand that it is not to hurt a player.

A lot of the instruction in terms of giving and taking a check safely, pinning an opponent against the boards, how to angle your body going into a corner, all of this can be taught off the ice, in equipment, but without skates. This can help all of us keep costs down, which in today’s world, is something we should all be aware of. Also, for coaches who are a year away from seeing the kids graduate into full contact, practising at least once every three or four weeks will help the kids transition to body contact when they reach that level.

One of the tips when giving a hit is to always make sure your skates are positioned in front of the puck handlers skates at all times. The player that is hitting is always ahead of the guy who is getting hit. It’s impossible to make a legal hit if your skates are behind the opposing player, going into the boards.

Another tip when giving a hit – keep your hands down and in front of you.Your stick is down low.

A good tip for coaches is to teach the players what I would call the “clock”, teaching them at what time they should be giving a hit. When you hit a player at twelve o’clock the chances are better that you will have head-to-head contact. Hitting a one, two and three o’clock is all fine, as is nine, ten and 11 o’clock. The clock is the guy who is getting hit. The guy who is going in to give the hit is the guy reading the time. At four, five, six, seven and eight o’clock, you are technically behind the player. When hitting at one, two, ten and eleven o’clock, most types of hits are shoulder to shoulder. When hitting three and nine o’clock, it is side by side. Just be careful to have your skates ahead, not side by side, so you have inside positioning on him.

Also, push off when taking a check. This will help you fend off an opponent, and avoid a check, or reduce the impact of the hit. Keep the puck and your arms in front of you. This way you will never have to look down.