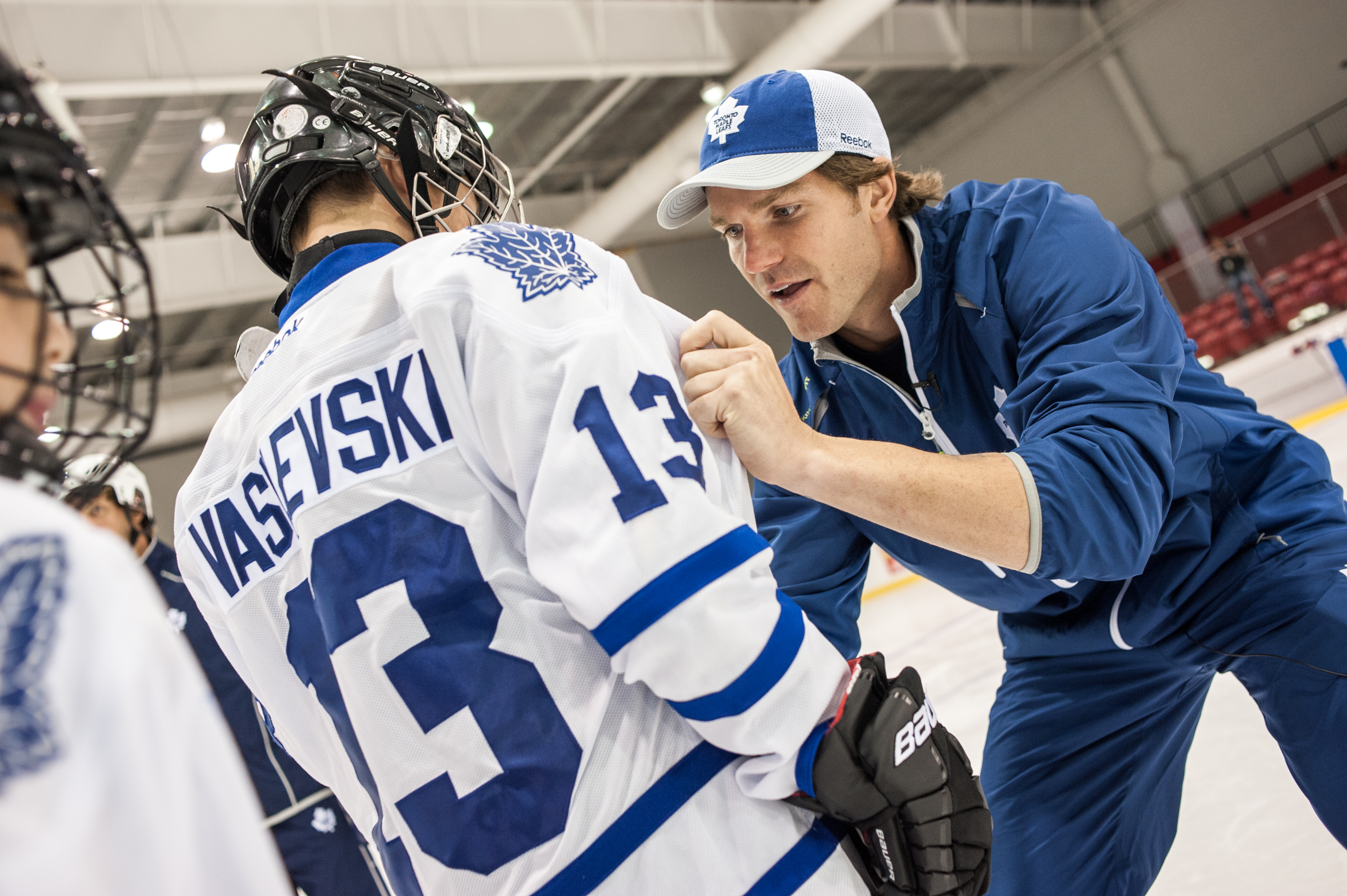 Home is where the hockey is
September 1, 2013
Breakout Magazine

The other day we were talking to an individual who does some personal branding work for Leafs’ Joffrey Lupul, David Clarkson and Jake Gardiner. When it comes to positioning in the marketplace, and how these three athletes will be positioned to marketers, Gardiner and Lupul were more targeted. Gardiner would be marketed more at kids. Lupul – with his movie star good looks and luxury lifestyle tastes – is marketed more to an older, more established mature crowd – Toronto’s new wealth, in many ways.

Clarkson? Clarkson is easy – like his childhood hero Wendel Clark, the 29-year native of Mimico is positioned more mainstream, the every man’s hero. That’s why when we caught up with him early this summer, his first public appearance since being sign to the big seven-year deal, $36 million free agent contract, the GTHL grad was coaching kids along with Clark, at the Mastercard Centre in Mississauga. Clarkson sat down for a Q+A with Breakout:

DC: There are a lot. Most have to do with him going down the wing, taking a big shot. Or a fight. I love that style of play, sticking up for teammates. Those are the kinds of things I enjoy.

B: WERE YOU LUCKY ENOUGH TO WORK WITH NHLERS WHEN YOU WERE A KID?

DC: Yeah I was. I went to a hockey school at a young age and we had NHL players there to teach us. I learned a lot. I could see how they reacted with kids.

B: WHAT WAS IT LIKE COMING BACK HERE TO PLAY WHEN YOU WERE WITH THE DEVILS?

DC: It was always special to come home and have the opportunity to play. A lot of guys, when they come home here, always have a bit more bounce in their step.

B: WHERE DID YOU PLAY YOUR GTHL HOCKEY?

DC: I was with the Marlies for five years, then went on to play for the Islanders for a few. It’s the best league you can play in, with all the top players. It’s so competitive. It’s a great league and helped develop me into the player I am today.

B: WHAT’S MINOR HOCKEY LIKE IN NEW JERSEY COMPARED TO TORONTO?

DC: You can’t beat Toronto for hockey, no doubt about that. It’s one of the biggest hockey meccas for kids. New Jersey had a great hockey program. Some of their top teams would play pretty well here.

B: WHAT ARE SOME OF THE ISSUES SURROUNDING MINOR HOCKEY TODAY, LIKE BODY-CHECKING, THAT GET YOUR ATTENTION?

DC: I leave that to guys who do the resting and studying. I can’t really comment on it.

B: COMING BACK HOME, WILL YOU BE WORKING MORE IN THE COMMUNITY?

DC: I am going to start a charity here in Toronto. I am hoping to make it huge. My grandmother told me if you can help others then make sure you do. I am fortunate enough to play a game for a living.

B: WHAT’S THE CHARITY?

DC: I want to start something for sick kids. It’s something I’ll start up once things get rolling here. And I’ll always be involved with the kids on the ice, or minor hockey.