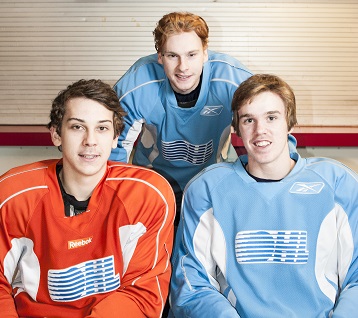 Crossing the border, one of the guards on the U.S. side, a younger guy, surveying one of our passports, ask us where we are going.

The McDavid brand has taken on more lustre since he left the GTHL’s Marlies organization as a 15-year-old underage OHL draftee in 2012. Now 16, and second in Otters scoring, the centreman with the NHL-calibre speed and soft hands has already looked above the level he’s at now, some NHL scouts have said. He’s a prodigy, attracting media attention from the likes of USA Today, TSN, Sportsnet magazine. Comparisons to Sidney Crosby have been made.

“I think that’s unfair to the player,” Otters coach Kris Knoblauch says, moments before the team takes to the ice at JMC Ice Arena in Erie, an old barn and temporary HQ for the team (there was a concert going on at their home rink).

The Otters are in first place in the Midwest Division in the OHL’s Western Conference, and it’s three GTHL grads that are pacing the attack – McDavid, with 37 points at the 22-game mark, Connor Brown, leading the team (and the league) with 46 points and 19 goals over 23 games, and rookie Dylan Strome, drafted second overall by the Otters last summer, with 13 points in 23 games. Strome and McDavid have since bonded, first meeting at the All-State All-Canadians Mentorship Camp. Now they attend the same high school in Erie–McDowell.

“I haven’t done anything,” McDavid says when asked about the Crosby comparisons. “I had my rookie season here, then a good start to this season, but I still have a lot of work to do. To be a successful you have to be complete player, and play in all situations.”

He’s a typical teenager—being asked to do the chores whenever he’s back home with the parents, asking them for his own car to get around in Erie, now that he has his licence (they said no).

McDavid is listed at 6-foot-0, 185 pounds. Life in the U.S. is “a little different”, he says, but he credits his billet family for helping him adjust. Working with former NHLer Gary Roberts during the off-season really helped with his leg and core strength, which has helped him adjust more to the bigger bodies and net traffic at the OHL level.

Brown and Strome, and the other Otter team members, have done a nice job sheltering McDavid from the autograph seekers and media attention, especially in the Canadian rinks. Otters PR man Aaron Cooney says they work to restrict the autograph seekers to youngsters, and work out to weed out more of the memorabilia collectors looking to stock up. When it comes to autographs and speaking to fans, McDavid will accommodate anybody, it seems.

Strome too is making the fast adjustment. A little shy around everyone out of the gate, he’s loosening up and finding his rhythm, off the ice as well. Cooney tells the story a team event at a Panera Bread location where Otters players showed up to ice cookies with kids who were there. Strome had a great time, Cooney says, jumping into photos, talking to the kids. “We have a god group of guys here, who have helped me adjust,” he says.

There was also the time McDavid came out to sign posters for fans, right after a game—all 1,000 of them.

Brown’s story is a little different. He’s older—19—and more of a late bloomer. Knoblauch’s lauds his hockey IQ, and his ability to score in tight. “He just needs to work on his shot a bit more,” the coach says. “If he adds that he’d be a really dangerous player.”

“I think with the GTHL guys, you think there would be more camaraderie because of that [connection], but at the end of the day we are all just hockey players, no matter where you come from,” Brown says. “I think with me, I just got better over time, and the team got better.”

All three players credit their GTHL experience for giving them the on-ice and off-ice foundation to make the jump to the next level. The Otters have either missed the playoffs or got knocked out of the first round for the past eight seasons, so there’s nowhere to go but up. The two Connors, and young Strome coming up fast, are impacting their rise to respectability.

Crosby once said that watching McDavid play “reminded me of myself,” so it’s not hard to peg that trajectory. Brown and Strome? That depends more on them.

“They are all excellent players,” Knoblauch says.