Peewee A
The Toronto Aeros are officially the hottest team in the Peewee A division after picking up their third consecutive win Sunday against the Ted Reeve Thunder. The 2-1 victory was the club’s third triumph of the week, following 6-0 and 2-1 wins over the Toronto Shamrocks and York Mills, respectively.

The three-game streak comes on the heels of a season-opening 5-2 loss to the Toronto Aces last Saturday.

The battle for first place in the West is in mid-season form just one week into the campaign. The Toronto Royals, Toronto Eagles and Vaughan Rangers each emerged with a pair of weekend victories, while the West Mall Lightning kept pace with a split of their two games.

In the first head-to-head matchup this season involving two of the four teams, Vaughan earned a 5-3 victory over West Mall on Friday.

A combination of strong offense and sound defensive play was the story the rest of the way, as the clubs combined to outscore opponents 34-6 in their remaining weekend games:

Minor Bantam AA
Every team strives for perfection. Nearly two weeks into the season, the goal of an unblemished record is still alive for four Minor Bantam AA teams.

North Toronto, the North York Knights and Vaughan Panthers all improved to 4-0-0 over the weekend, joining the idle Streetsville Tigers with perfect starts to the 2015-16 season.

In the West, the Panthers caught up to the Tigers with a pair of weekend victories. The club first skated to a 5-2 win over the Mississauga Jets on Friday before blanking the Toronto Royals 5-0 on Sunday afternoon.

In 2014-15, the Peewee AA Tigers were one of five GTHL teams to finish the regular-season without a loss. They won the Kraft Cup in the West and also captured the Scotiabank GTHL Playoffs title, defeating the Knights – the East division Kraft Cup champions – in the final.

Midget AAA
The Toronto Young Nationals picked up right where they left off.

The Nats – who in April became the second team in GTHL/MTHL history to win the national midget championship – allowed only one goal in their two wins, defeating the Vaughan Kings 2-0 and Toronto Titans 2-1.

In 2014-15, the Young Nationals posted a plus-82 goal differential during the regular-season, scoring 3.76 goals per game and allowing only 1.27 goals against per game. 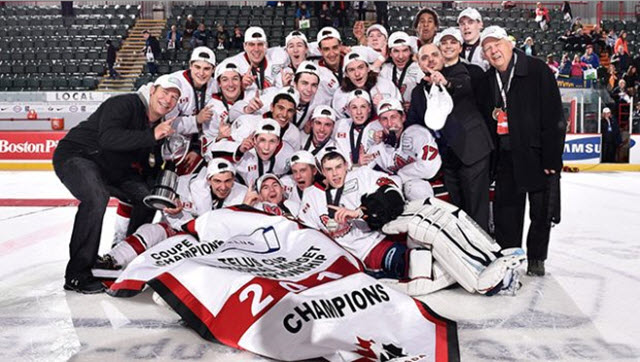 The Young Nationals cruised to a 6-2 win in the final at last year’s TELUS Cup. It was their second consecutive appearance at the national midget championship. (MATTHEW MURNAGHAN / Hockey Canada Images)

The Mississauga Reps, Toronto Jr. Canadiens and North York Rangers also won their first two games of the season, as each of the division’s 12 clubs began with a weekend double-header.