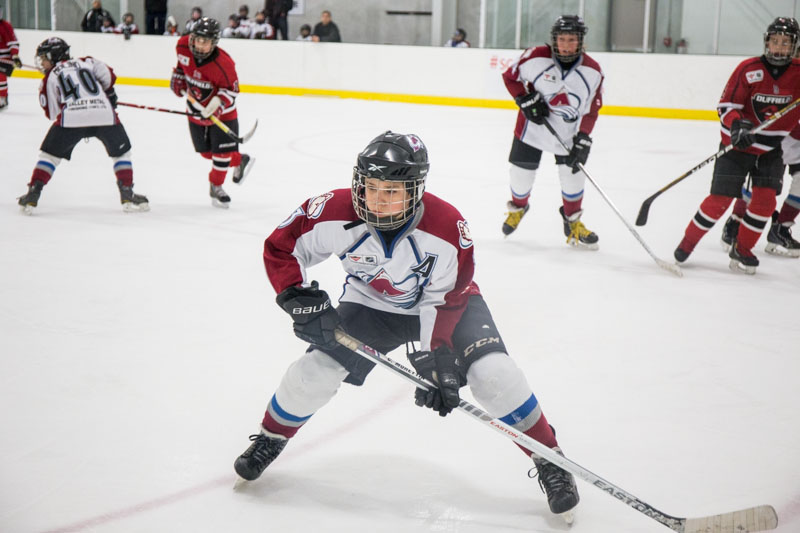 A total of 225 Kraft Cup regular season games were played over the weekend, with 99 contested Saturday and 126 on Sunday. In addition, all four Minor Midget AAA first-round series wrapped up last week and second-round matchups began on Sunday.

Minor Midget AAA
The Toronto Titans earned a 5-0 over the Toronto Young Nationals on Friday to win their first-round series eight points to two.

The second-ranked Don Mill Flyers also picked up a 6-1 victory on Friday night to close their series with the Toronto Red Wings. The Flyers won the five-game first-round matchup nine points to one.

Second-round matchups began Sunday, with the Jr. Canadiens picking up a 5-3 win over the Flyers and the Titans and Marlboros skating to a 2-2 tie.

Bantam A
The Vaughan Panthers skated to a perfect 2-0 record over the weekend to improve to 29-2-3 (61 points) this season and clinch the top spot in the West division. The Panthers picked up a 5-1 win on Saturday night against the Amesbury Attack before blanking the Humber Valley Sharks 3-0 on Sunday afternoon.

With first place officially out of reach, the Toronto Royals claimed second place in the West after picking up three points over the weekend. The club began with a 4-2 win over the third-place Sharks before skating to a 0-0 tie with the Toronto Wolverines on Sunday. At 23-4-5 (51 points), the Royals hold a nine point advantage over the Sharks (19-9-4, 42 points); both teams have four games remaining.
The Willowdale Blackhawks stormed to a 6-1 win over the Toronto City Blues on Saturday afternoon to improve to 27-4-4 (58 points) and clinch second place in the East division. The Toronto Aeros – who also won their Saturday contest (4-1 vs. Toronto Shamrocks) – already have first place locked in with a near-perfect 32-1-2 (66 points).

The Goulding Park Rangers picked up a big 5-1 win over the West Hill Golden Hawks on Saturday afternoon to advance their position in the race for the final playoff spot in the East. At 15-17-3 (33 points), the Rangers hold a four-point advantage over York Mills (13-18-3, 29 points). York Mills, however, have two games remaining while the Rangers have only one.

Minor Peewee AA
First place in the West division is wide open with 11 days remaining in the Kraft Cup regular season.  The Vaughan Panthers were the only one of four teams vying for top spot to play over the weekend, picking up a 6-0 shutout against the Avalanche.

The Mississauga Jets picked up a 5-0 win in their season finale to pull even with the Avalanche (15-10-7, 37 points) – in terms of points – for the final playoff spot in the West. The Avalanche, however, need only one point in their final four contests to clinch the last postseason berth. If the clubs remain tied at the end of the regular season, a one-game tiebreaker will be scheduled to determine the final playoff spot.

In the East, the Ted Reeve Thunder (4-3 vs. East Ender Ticats) and North Toronto (4-0 vs. North York Knights) each picked up wins over the weekend to keep pace in the race for second place. The Thunder close their season on Wednesday against the first-place Goulding Park Rangers (24-6-5, 53 points) while North Toronto hosts the fourth-place Leaside Flames (18-9-7, 43 points) in their finale on Friday

Minor Atom AAA
The Toronto Titans (25-2-3, 53 points) blanked the North York Rangers 7-0 on Saturday afternoon to pull within one point of the idle Toronto Young Nationals (26-2-2, 54 points) for first place. Both clubs have three games remaining.

The Toronto Marlboros clinched third place on Sunday morning thanks to their 4-1 win over the Mississauga Senators. The win, coupled with the Vaughan Kings’ 3-3 tie with the Mississauga Rebels gave the Marlboros the edge in a potential tiebreaker.

The Mississauga Reps defeated the Red Wings 4-2 on Saturday morning to stay in the race for home-ice advantage in the first round. At 15-11-4 (34 points), the Reps occupy sixth place and are two points behind the fourth-place Kings (15-9-6, 36 points).

Visit our Games Centre page for all the scores and standings