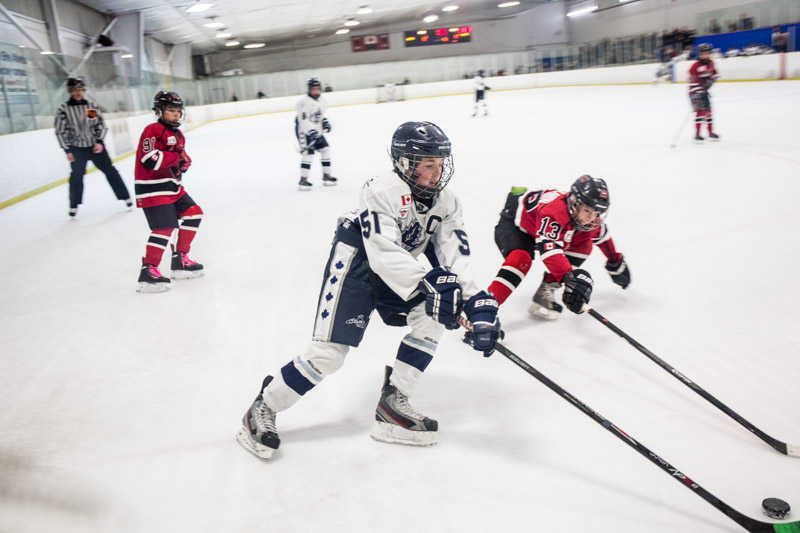 Minor Midget AAA
After the Toronto Titans captured the Kraft Cup in overtime of the tiebreaker game last Monday, the Scotiabank GTHL Playoffs kicked off on Tuesday with the first game of three series.

Each first-round matchup has seen three games played, with the higher-ranked team leading each first-to-eight-points series:

Atom A
The Toronto Wolverines earned a 5-1 win over the Duffield Devils on Saturday at York University to move within two points of the final playoff berth in the West division. The Wolverines (11-18-4, 26 points) are battling the Vaughan Rangers (13-14-6, 32 points), Toronto Eagles (13-16-2, 28 points) and Toronto Royals (11-15-6, 28 points) for the final three postseason positions.

The Eagles (five games remaining) and Royals (four games remaining) hold a slight edge based on games played as both the Rangers and Wolverines have only three games left on their schedules, including a head-to-head matchup tonight (Monday, Jan. 19) at Vaughan Sports Village.

In the East, the Willowdale Blackhawks also kept their playoff hopes alive on Saturday with a 5-1 win over the West Hill Golden Hawks, one of three teams they are chasing for a playoff berth. The other two clubs are North Toronto and the North York Knights; North Toronto lost their lone weekend contest, 2-1 to the Markham Islanders.

The Blackhawks have won their last three games by a combined score of 17-3 and need victories in at least two of their final three contests to have a shot in the four-team group. The Golden Hawks, North Toronto and North York Knights each have two games remaining.

Below is a look at the remaining schedule for each of the four teams gunning for the final three playoff spots:

Peewee AA
The North York Knights won both their games over the weekend to leapfrog idle York Mills into first place in the East division. The Knights shut out the Goulding Park Rangers 6-0 on Saturday before skating past the Toronto Shamrocks 5-1 on Sunday.

The Shamrocks won their other weekend contest (6-3 vs. Willowdale Blackhawks) to overtake the Markham Islanders for the final playoff spot.

In the West, the Vaughan Panthers knocked off the Duffield Devils 7-2 to keep their shot at first place alive. The Panthers (25-3-5, 55 points) are four points behind the undefeated Streetsville Tigers (26-0-7, 59 points) with each team three games away from the end of their regular season schedule. The Mississauga Braves (25-4-3, 53 points) also still have a shot at first place; they sit six points back with four games remaining.

The Etobicoke Canucks (4-3 vs. Toronto Royals), Vaughan Rangers (2-1 vs. Humberview Huskies) and Toronto Eagles (4-2 vs. Mississauga North Stars) all earned victories over the weekend to keep pace in the race for the final playoff berths in the West.

The Humber Valley Sharks posted a convincing 6-0 win over the Toronto Wolverines on Sunday. At 23-5-4 (50 points), the Sharks require only one win in their final four contests – or a Huskies loss – to clinch a top four finish.

Bantam AAA
The Toronto Jr. Canadiens posted a pair of lopsided victories over the weekend – 5-0 vs. Vaughan Kings and 6-1 vs. North York Rangers – to snap a three-game winless stretch and earn their first wins since Dec. 21. With the victories, the Jr. Canadiens (17-8-5, 39 points) pulled five points ahead of the Toronto Titans (14-10-6, 34 points) for fifth place.

The Mississauga Rebels notched a 7-0 win over the Markham Majors to move within one point of the idle Toronto Red Wings for top spot in the division. The Rebels (24-3-3, 51 points) handed the Red Wings (24-1-4, 52 points) their only loss of the season on Dec. 18, a 6-1 defeat at Iceland. The Red Wings have one game in hand. 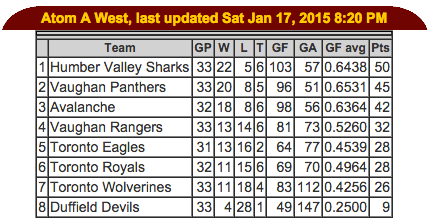 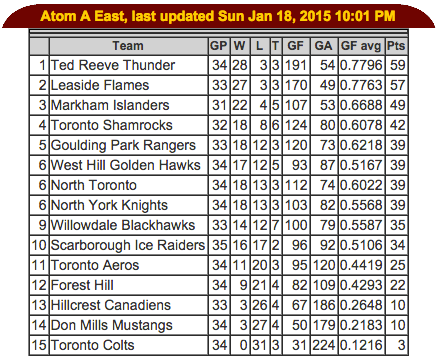 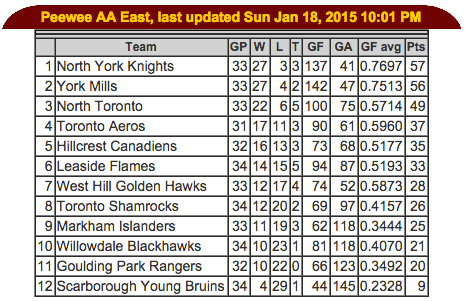 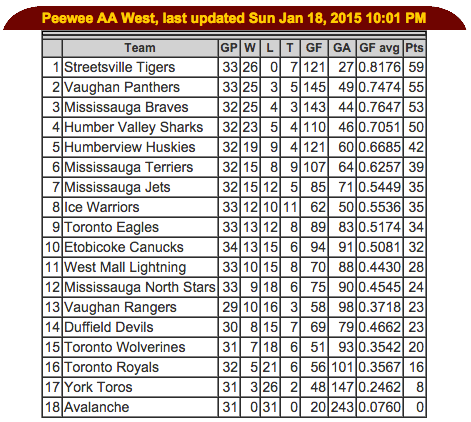 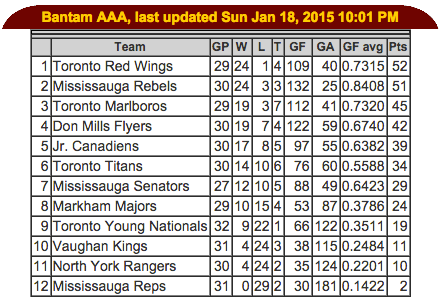