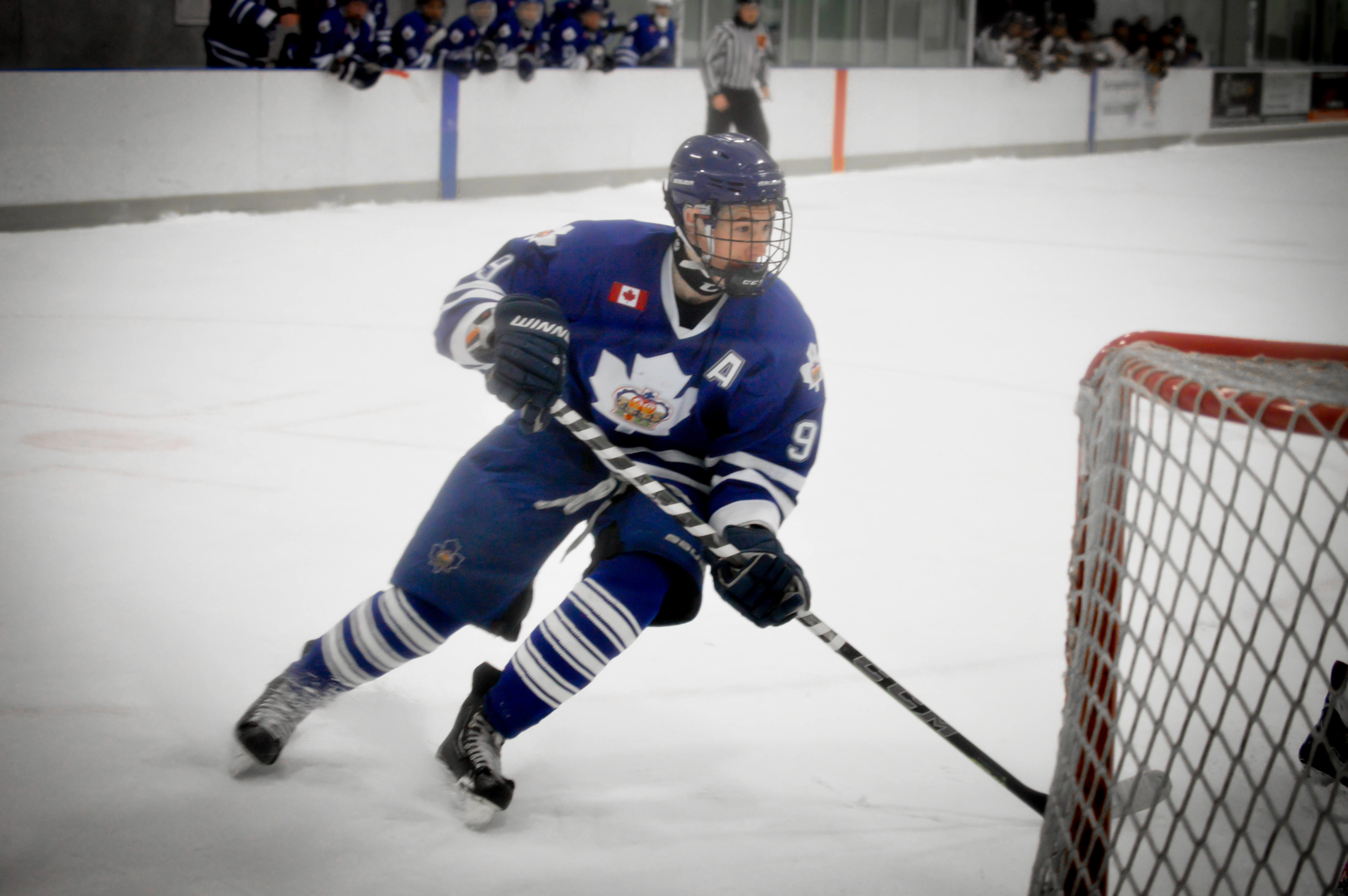 Scotaibank GTHL Playoffs continued across the Greater Toronto Area over the weekend, but we also dropped the puck on the 2015 King Clancy Cup. More than 130 teams from Minor Atom A to Midget Jr. A are competing in the event, which saw 124 games played from Friday to Sunday.

Minor Midget AAA
The Toronto Marlboros picked up a 2-1 win in Game 3 of the GTHL Championship series to enter the Canada Winter Games break with a 4-2 lead in their first-to-eight-points matchup against the Don Mills Flyers.

Three players are hoping to have some new hardware around their necks by the time the final resumes on Friday, Mar. 6 at Herb Carnegie Arena (time TBD). Marlboros teammates Ben Jones and Ryan McLeod and Flyers forward Brett Neumann are among the 11 GTHL players representing Team Ontario at the 2015 Canada Winter Games in Prince George, B.C.

Click here to track Team Ontario’s progress throughout the Games.

Minor Atom A
The Goulding Park Rangers picked up a 5-1 win in Game 6 against the Ted Reeve Thunder on Tuesday to avoid a First Round upset and win their first-to-six-points series 7-5.

The Rangers then dropped the first two games of their Second Round matchup with North Toronto, the No. 1 seed in the East.

In the other Second Round series, Forest Hill posted three straight wins over the Leaside Flames, including 3-0 and 4-0 shutouts in Games 2 and 3, to advance to the Third Round. Forest Hill also won the regular-season series between the clubs 2-1, but finished two points behind the Flames in the Kraft Cup standings.

In the West, the top-ranked Vaughan Rangers swept their series against the West Mall Lightning to continue their undefeated season. The Rangers, who earned a bye into the Second Round thanks to their 34-0-2 regular-season record, posted 8-0 and 9-2 wins on Friday and Sunday, respectively, to advance to the West Final.

The Vaughan Panthers are ahead 3-1 against the Humber Valley Sharks in the other West semifinal, after a 0-0 tie on Friday and a 5-1 win on Sunday.

Bantam AA
The Etobicoke Canucks earned 3-0 and 4-3 wins in Games 4 and 5 of their opening round series against the Mississauga Braves last week to advance to the Second Round of the Scotiabank GTHL Playoffs.

Their counterpart in the Second Round, the No. 2 seed Vaughan Rangers, posted a 7-2 win over the Vaughan Panthers to slip past their closest rival in five games.

The Rangers and Canucks began their matchup on Sunday, with Vaughan skating to a 4-2 win at Hershey Centre.

In the other Second Round series, the Mississauga Jets will take on the top-ranked Ice Warriors after picking up a 2-2 tie and 3-2 victory last week to win their first-to-six-points series 7-5 against the Mississauga Terriers.

In the East, the Kraft Cup champion Scarborough Young Bruins pulled ahead 4-2 in their first-to-six-points series with the Markham Islanders after blanking the club 4-0 in Game 3 on Thursday. The Islanders will look to keep their season alive in Game 4 tonight at Scarborough Gardens.

Meanwhile, the No. 2-ranked Ted Reeve Thunder awaits either the Young Bruins or Islanders in the division final after earning a 6-2 series win over the Toronto Aeros. The Thunder advanced on the strength of three straight shutouts last week, including 5-0 and 4-0 wins. Overall, the Thunder allowed only one goal against in the four-game series; they surrendered only 28 goals against in 36 regular-season games.

Midget AAA
The quest to reach the OHF Championship – and hopefully earn a berth in the Telus Cup – continues for the Mississauga Rebels, who earned a 4-1 win in Game 8 of their opening round series against the North York Rangers last week. The Rangers forced the decisive contest with a 5-4 victory on Tuesday.

The Rebels (No. 5) are the only team outside the top four to advance, and now face a 2-0 series deficit against the No. 1 seed Toronto Young Nationals – the defending OHF champion – after a 3-0 loss on Saturday.

The Young Nationals cruised to a 25-3-5 record in the Kraft Cup regular season and surrendered only three Rebels goals in three meetings (2-1 TYN, 7-1 TYN, 1-1 tie).

In the other Second Round matchup, the Don Mills Flyers hold a 5-1 lead over the Toronto Jr. Canadiens following a 1-1 tie and a pair of 3-0 victories over the weekend.