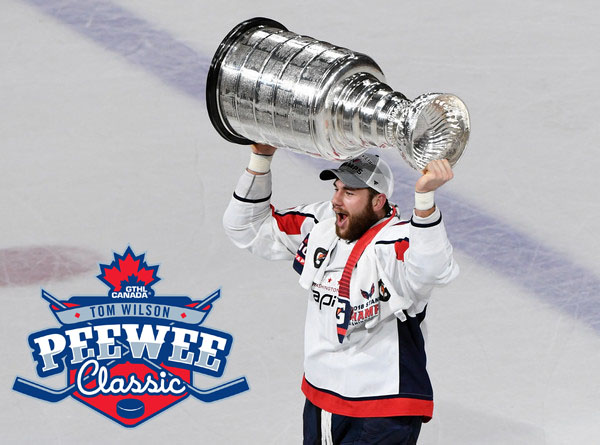 Eligibility
The Peewee tournament is open to Minor and Major Peewee “AAA” teams across Canada and the United States.

Format and Regulations
Details regarding rules, regulations, and formation for the Tom Wilson Peewee Classic can be found here.

About Tom Wilson
Starting off his hockey career playing for North Toronto, Tom Wilson was quick to climb the ranks, finishing off his time in the GTHL with the Toronto Jr. Canadiens. Tom was drafted by the Plymouth Whalers of the Ontario Hockey League out of Minor Midget – an organization he represented for three seasons. His physical and crafty play caught the eye of the Washington Capitals, who drafted Tom  16th overall in 2012.

This past season, Tom played a crucial role in helping lead the Capitals to a Stanley Cup victory – a first for the franchise.

Tournament History
Previously called the Bell Challenge Cup, Bauer Challenge Cup, and GTHL Challenge Cup, the annual Peewee-aged tournament ran for over 20 years over the Christmas break. Teams from Canada and the United States would compete over the four-day tournament, which acted as an early-season preview to the Quebec Peewee tournament. Alumni of the event include the likes of Steven Stamkos, P.K. Subban, Patrick Kane, Tyler Seguin, and more.

Format
Quality is better than quantity as a total of 30 between the Minor Peewee “AAA” and Peewee “AAA” levels will participate in the 2019 tournament.  The tournament consists of a round-robin format with each team guaranteed four games. All games will be run under stop time. Game length for all games will be 12-12-15.

Accommodations
The host hotel for the 2019 Tom Wilson Peewee Classic will be the Toronto Airport Marriott. All teams requiring overnight accommodations MUST stay at this hotel for the duration of the tournament.