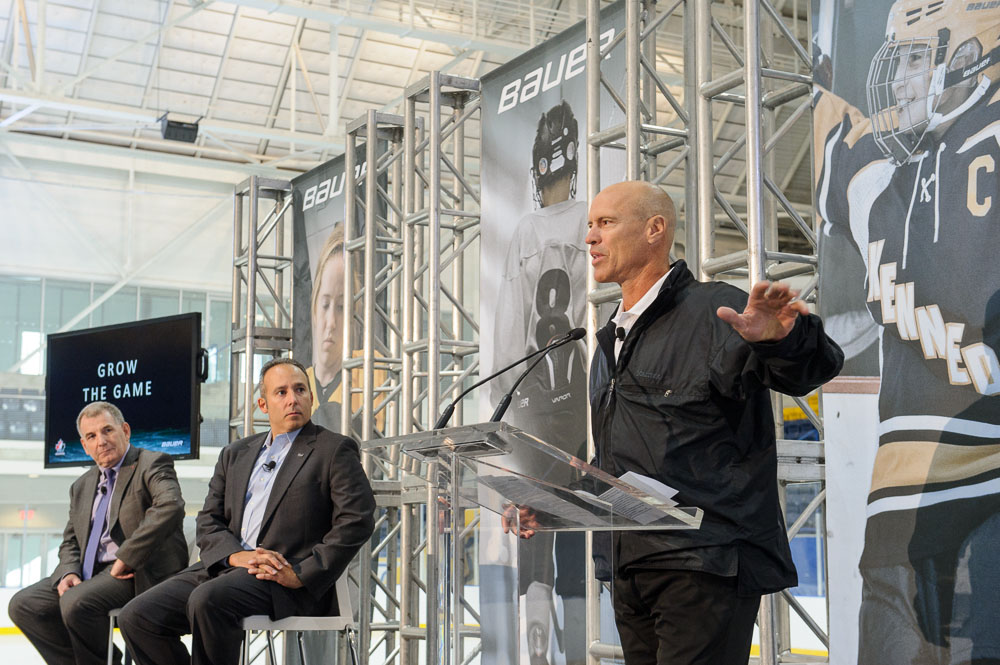 I remember my father telling me about the process of getting me registered for hockey when I was a kid. Long lineups at the hockey rink in Hamilton, starting at 1 a.m., hours on end into the early Sunday morning, just so he could grab one of those treasured slots for his kid. I was at home sleeping soundly in my bed.

It was an amazing sacrifice he made, one which I probably never fully appreciated. And it’s one of the impediments when talking about registration today. I mean, who among us would go through something like that?

Bauer Hockey President and CEO Kevin Davis remembers being a “non-hockey-playing person” back in the day when he registered his son to play. “You go to the rink, you get the gear and the jersey and the socks, then you are pointed to a dressing room, and told, ‘There you go,’” he says. “If you are not of that ilk, and don’t come from that experience, that’s not a very welcoming thing.”

Bauer Hockey Inc. and Hockey Canada announced a partnership in August that included an independent initial research study that looked at barriers for non-hockey families as they decide to play different sports, all as hockey registration numbers decrease.

The Grow the Game partnership also focuses on the creation of pilot programs developed to address the results of those findings – in particular, the fact hockey is not perceived as fun, the perceived time commitment, perceived safety, and perceived affordability.

Pilot programs featuring six-week sessions at one hour per week will launch Oct. 28 in Hamilton, Scarborough, Halifax and East Hants, designed to be fun, affordable and convenient. Enrollment and equipment will be bundled together for $100.

Breakout caught up with Kevin about the program, especially about next steps:

B: WHAT HAS THE RESPONSE TO “GROW THE GAME” BEEN LIKE?

KD: Overwhelmingly positive. Occasionally, we’ll get a response, like, “Well, you sell hockey equipment, obviously you want to do this.” There is a commercial aspect to the thing we do in hockey, but at the same time there is an obligation as a leader in the industry to do something more than simply selling hockey equipment. This is one of the things we are proud to initiate, in conjunction with Hockey Canada.

B: WHAT WAS YOUR PERSONAL REACTION TO THE SURVEY FINDINGS? WHAT SURPRISED YOU?

KD: The one that was surprising was the lack of characterisation that hockey is viewed by non-hockey-playing families as a fun sport.

B: WHAT ARE SOME OF THE WAYS TO GET NEW CANADIANS REGISTERING TO PLAY HOCKEY?

KD: There wasn’t any difference between how new Canadians viewed the sport and everyone else. The top four (barriers) provided by new Canadians were the same top four as the survey in total. That was very encouraging because it means we have one set of things we are trying to solve and not multiple sets for multiple constituencies. That would really present challenges. New Canadians have demonstrated the same willingness to consider hockey at a significantly high level. There are things we can do as a company, and then there are things the greater hockey community can do to open the sport to non-traditional hockey families. There is broader marketing around the fun part and the lifelong lessons part of the sport that we all need to do a better job of communicating.

B: TELL US ABOUT THE IMPLEMENTATION OF THESE PILOT PROGRAMS?

KD: These will address the concerns we picked up in the survey. We are going to roll these out, see what the re-enrollment numbers are (after the first six-week session). We’ll do follow-up studies, tweak the programs, and roll them out across Canada. This is a trial program. You do the survey work, you re-evaluate, and try new things. We are trying to be very measured with this. Working with the game’s governing bodies is critical. It’s like when you are making a great product – you try some things, you learn from those attempts and you make it better. That’s what we are going to do here.