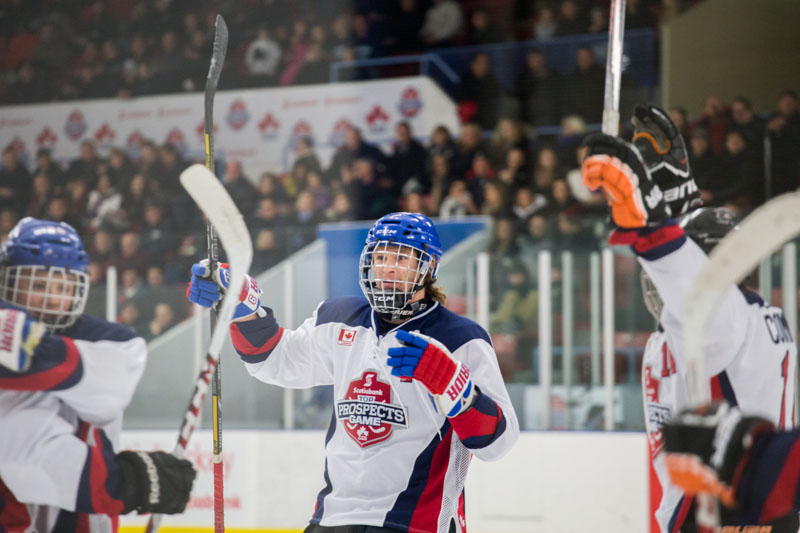 Not every kid born in Boca Raton, Fla., dreams of playing at the World Junior Championship – especially for Team Canada. But as he has shown time and time again, Jakob Chychrun isn’t “every kid.”

Chychrun, who spent much of his childhood at his family’s cottage just outside Ottawa, has dreamed of this opportunity since he was young.

“During the Christmas break we’d head north,” penned Chychrun in a blog for NHL.com. “We were driving toward the snow when most people in Canada were heading toward Florida, but we had lots of family and friends over to watch the World Junior Championship games.”

Playing with the Toronto Jr. Canadiens at age 15, Chychrun became the first non-Ontario Hockey League player selected for Team Ontario’s under-17 team. Two years later – and at a hulking 6-foot-2, 215 pounds – he is aiming to become the only 17-year-old defenceman to crack Team Canada’s roster for the 2016 World Junior Championship.

Should he achieve his goal, Chychrun would become the second NHL Draft-eligible defenceman to make the team in the last three years. Aaron Ekblad suited up for the team in 2014 before the Florida Panthers selected him first overall in June.

No pressure, right? Actually, apparently not.

“I’m not looking at any outside pressure,” Chychrun told the National Post. “I’m just coming in, I know I’m young but I’m going to try to be a leader, try to be vocal and do everything I can to make the team.”

His desire to “be a leader” in a group of 19-year-olds is one characteristic that has scouts projecting Chychrun as one of the top picks in the upcoming NHL Draft. His strong play on both the offensive and defensive side of the puck also helps.

Chychrun collected 43 points (16-27—43) in 29 games during his lone GTHL campaign, and also scored the decisive tally in the 5th Annual GTHL Top Prospects Game. His season was cut short due to injury – causing him to miss the Jr. Canadiens’ Kraft Cup-clinching victory and the team’s run to the OHL Cup final – but scouts were not deterred.

The Sarnia Sting made Chychrun the top pick in the OHL Priority Selection. The only other defenceman to earn that distinction in the last 12 years is Ekblad, who went on to win the Calder Trophy as the NHL’s top rookie last season.

The 17-year-old has been surrounded by NHL talent all his life – his father, Jeff Chychrun, won a Stanley Cup with the Pittsburgh Penguins in 1992 and his uncle, Luke Richardson, played more than 1,400 games in the league.

Jakob, who plays with more offensive flare than his father and uncle did, will try to one-up them at the draft in June. His father was a second-round selection by the Philadelphia Flyers in 1984, while the Toronto Maple Leafs made Richardson the seventh overall pick three years later.

According to Team Canada head coach Dave Lowry, a player’s age or draft status will not keep him off the team.

“They’re all very highly-regarded players, and obviously we feel that they have a legitimate shot to be a part of our team, or they wouldn’t be here,” Lowry told the Canadian Press. “We always say we don’t look at the age of the player, we’re going to take the best players.”

So what are the odds Chychrun is guarding the Canadian blueline in Finland later this month?

Chychrun, who shares sixth among OHL defencemen and ranks second in Sting scoring with 5-17—22 this season (28 GP), plans to let his play – and not his age – do the talking.

“I don’t think the fact I haven’t been drafted yet puts any added pressure on me,” Chychrun wrote in his blog. “I’ll just try to go in there and fight for a spot on the team.”

covid19
The Survey Results Are In
7 days ago