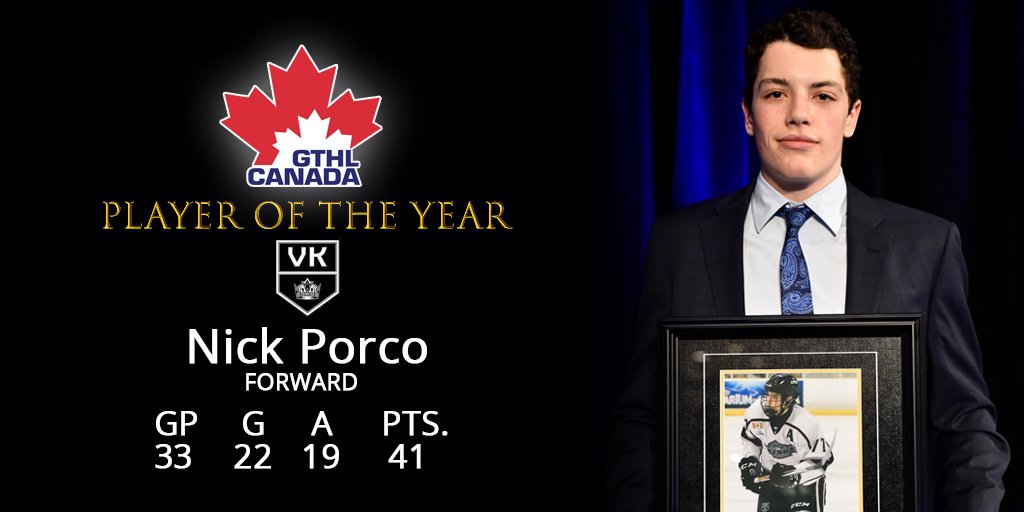 When Vaughan Kings Minor Midget forward Nick Porco moved to Toronto from Sault Ste. Marie during his Bantam season, he set his sights on making the GTHL Top Prospects Game roster. But like many of great players that came before him, Porco would accomplish a lot more than what he originally set out to do. At the end of the regular season, he had accumulated 22 goals and 19 assists, for a total of 41 points – an average of over a point per game and the most out of any player on the Kings roster.

“Coaches dream,” said Kings Head Coach Beau Moyer when asked to describe Porco. “Never wastes a practice to get better and always willing to learn to make himself better.”

Halfway through the Kings OHL Cup run, Porco would add another accomplishment to his impressive resume after being named the GTHL’s Minor Midget Player of the Year at the annual OHL Cup Banquet. Voted on by coaches, managers, and organizations, the award honours the Minor Midget player who best exemplifies the qualities of sportsmanship and leadership.

“I felt very honoured, especially when I wasn’t expecting to win it,” said Porco, who will join the ranks of previous GTHL award recipients including Dylan Strome and Connor McDavid. “As excited that I was, I took time to think about how lucky I am and how I am surrounded by so many great people.”

After a tournament eliminating loss to the Toronto Young Nationals in the OHL Cup semi-finals, Porco is looking ahead to next season.

“At this time next year, I hope to be playing in Ontario Hockey League and have locked up a playoff spot with my team.”

His Kings coach doesn’t think that will be far from reality, calling Porco “home run” for April’s OHL Priority Selection.

Porco is the first Vaughan Kings player to win the award since 2014 when Kitchener Rangers star Adam Mascherin was honoured after a standout Minor Midget season. Porco was awarded alongside players from the OMHA ETA, OMHA SCTA, NOHA, HNO, and ALLIANCE. Click here to see a full list of winners.