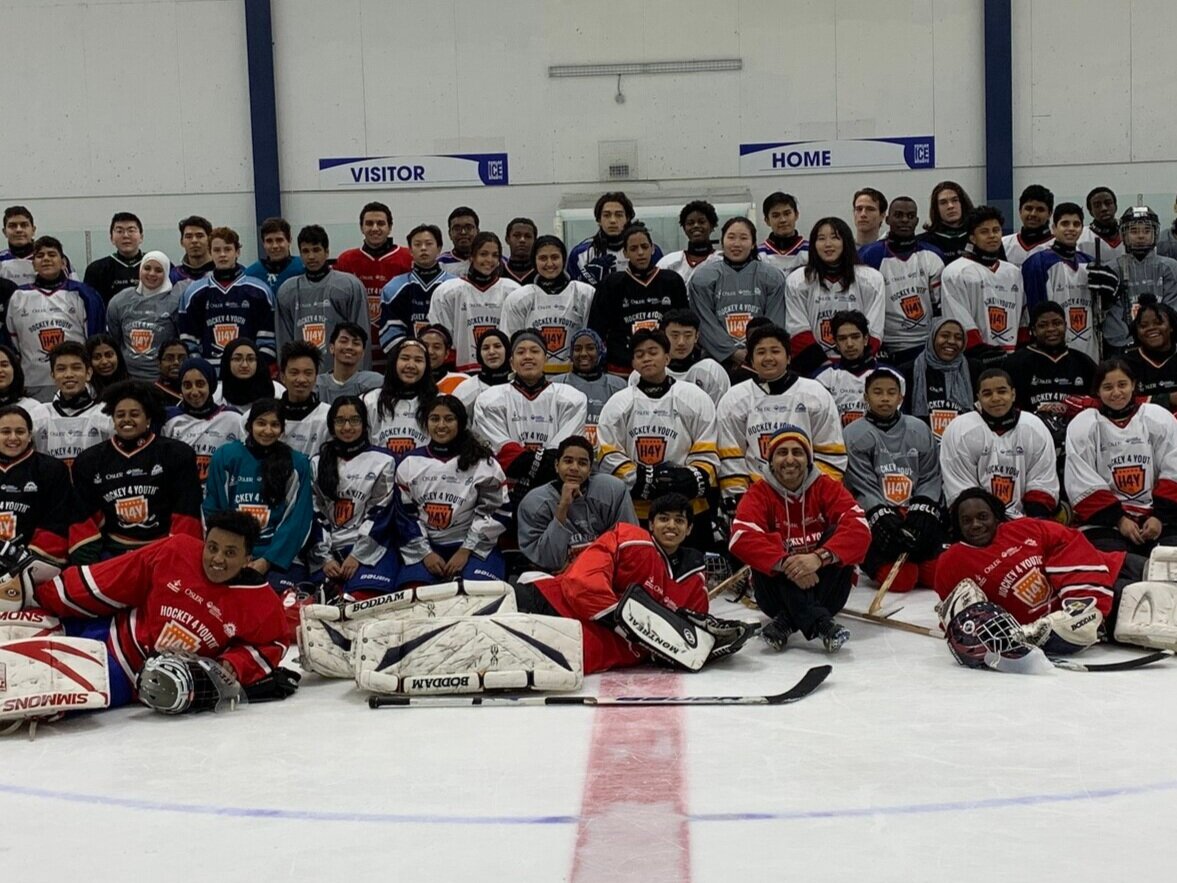 It’s an autumn morning in Toronto and Moezine Hasham is on his way to Central Technical School to officially kick off his version of the new hockey season – one that provides teenagers with the opportunity to participate in a sport they never thought they would play.

Hasham started a nonprofit organization called Hockey 4 Youth in 2015, with the intent of making hockey accessible for people in high school who are newcomers to Canada.

“The kids that we’re trying to get to are kids with a low-income status,” said Hasham.

The Founder and Executive Director of Hockey 4 Youth believes his program can not only provide the opportunity for people to play hockey for the first time, but also help improve their English literacy.

“They’re new to the country and they’re still learning how to speak English,” said Hasham. “What better way to do it than through inclusive sport.”

Hasham, originally from Vancouver, lists Thorncliffe-Flemingdon, Rexdale, and the Annex as the neighbourhoods in Toronto he visits to find the kids that fit his target demographic – teenagers who have not yet been introduced to hockey due to financial, racial, and gender-based barriers.

“We know we’re going to find kids in those classrooms that we’re trying to get to.”

Instead of taking the route of introducing the game to younger kids, Hasham believes he’s found a gap in the Canadian-hockey landscape – one that makes learning the sport possible for the people currently in high school who were not able to in their country of origin.

It’s an idea that’s existed with Hasham long before he played hockey himself.

When the Hockey 4 Youth Founder and Executive Director was six-years old, he watched his older brother, Nazim, struggle with the challenges that came with playing hockey in Vancouver as a child of refugees – ever since, he’s been on a mission to ensure others don’t deal with those same experiences.

“The reason why I started working with teenagers is because I knew what my older brother’s experience was like in ice hockey,” Hasham stated. “It was always in the back of my mind, and the more I started to think about who’s being left out, I immediately thought about 14 and 15 year olds that were arriving in this country.”

Hockey 4 Youth currently provides kids aged 13-19 in Toronto, Ottawa, and Montreal with the opportunity to get on the ice and learn the fundamentals of the sport. They skate once a week, with the cost of equipment, and ice time all covered by the organization.

“We do have some kids who are first-generation Canadians, girls and boys,” said Hasham. “They come from low-income neighbourhoods, and they’re first-generation and in some cases second-generation, but the circumstances have not allowed them to play the game.

“Our focus is on newcomers, but it doesn’t always work that way. If that kid has never been able to afford a chance to play the game and they’re in high school, then I’m not going to turn them away.”

Aside from the financial barriers that prevent kids from playing hockey, Hasham believes that there are other factors that have not been fully examined.

“I think beyond the (financial barriers), what’s not necessarily written about is the gender barriers that exist, the culture barriers, maybe English literacy,” Hasham listed. “Those are definitely challenges. But ultimately, if you can’t get onto the ice, then you’re not going to experience the game, so that financial barrier is going to be the first thing people look at.”

Introducing kids to hockey is one thing — accelerating their comfortability to Canadian culture is another.

“Minor hockey is unfortunately not set up to welcome (teenagers) who have never skated before,” said Hasham. “What we’ve tried to build is something that is inclusive, safe, and removes barriers, but also to get them into the game that we love.”