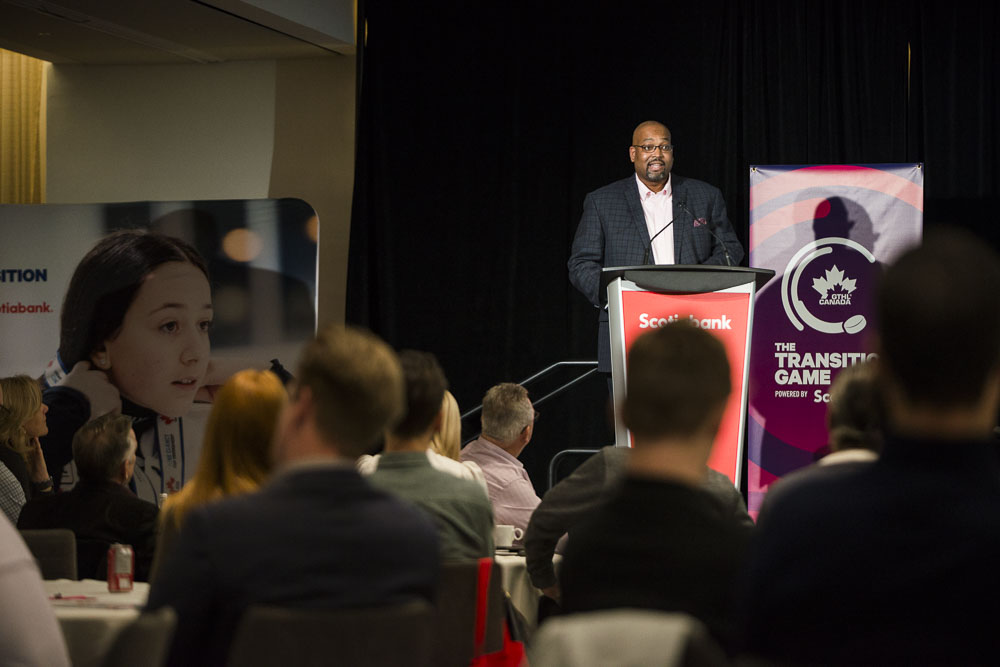 Kyle Dubas’ son may only be two and a half, but the Toronto Maple Leafs General Manager is already fielding questions about where he plans to enroll his child in minor hockey. It’s a decision that Dubas won’t have to make for another year or two, but the 33-year-old father will inevitably find himself in the same shoes as many parents across Canada – and as participants at The Transition Game learned – Dubas is already well aware of the stark realities facing minor hockey.

Declining enrolment, lack of diversity, and attracting new Canadians to the game were some of the key themes that emerged as over 160 participants attended the GTHL organized summit designed to address concerns surrounding the game of hockey.

“We are here today because there’s a minor hockey situation at large. We can do nothing at the NHL or with the Leafs and hope everyone makes it okay and fixes the issues of enrolment,” Dubas told MC Brenda Irving. “I think for us to just hope and not support would be ignorant of us.”

Over the past decade, enrolment in hockey has been steadily declining across Canada, while the population continues to rise. GTHL President Don West noted that Hockey Canada registration has fallen to 453, 361 participants, down from 500,120 a decade ago.

“If the GTHL fails, hockey in Canada will fail, and it arguably already is,” said Dr. Stephen Norris – a consultant with Hockey Canada. “I’m deeply frustrated, I don’t know where the future of Team Canada comes from. Do you have the courage as the GTHL to be different and buck the madness?”

The madness that Dr. Norris referred to was, of course, everything from early specialization, to resistance to change – whether it be reluctance towards modified ice or elite “AAA” programming being introduced at a later age.

Lack of diversity and the culture of the game were also topics at the forefront of discussions throughout the day. Hockey currently ranks 22nd out of 25 sports that new Canadians participate in. Over 321,000 new-Canadians have arrived in the country since just last year.

“We have to make kids and families feel like hockey is available to them,” said Kim Davis, Executive Vice- President of Social Impact, Growth Initiatives and Legislative affairs for the NHL.

Marlowe Stoudamire, a consultant with the NHL, emphasized that change is necessary in order for growth.

“You have all the ingredients you need; the problem is the recipe needs to be updated….this is not easy, this is an impressive organization, you have a rich history and you will have a legacy that will stand the test of time. The question is, who will that benefit?”

Day two of the conference saw a smaller group of participants return and put their ideas for the future of hockey on paper. Hockey Canada CEO Tom Renney spoke to the crowd of approximately 40 people that included people involved in the game in various capacities before the group got to work on helping the future of the game look brighter. More information on the execution of various strategies that came out of the event will be made available in the coming months.