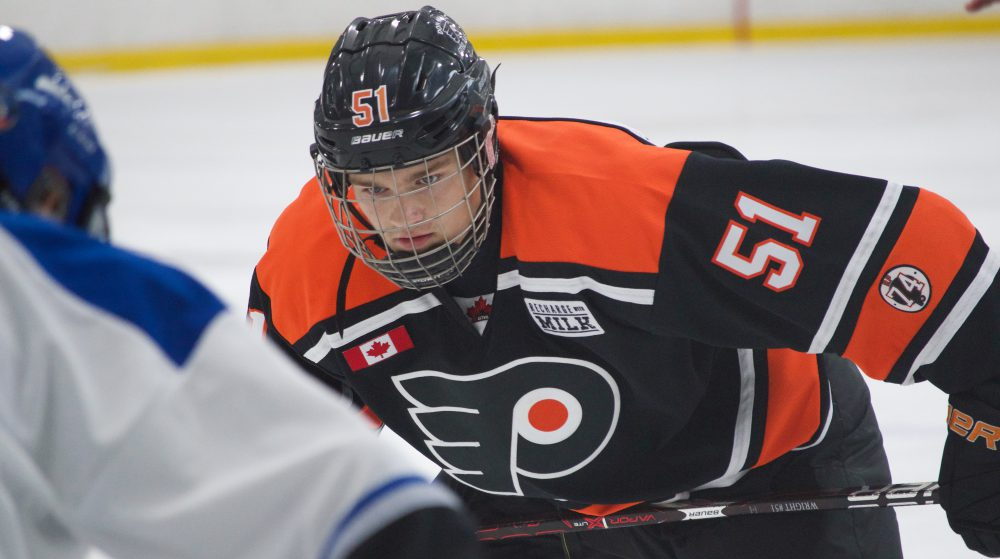 The Kids Are Alright
December 9, 2018
Prospects

Don Mills Flyers forward Shane Wright has been amongst the “big boys” since he was in Tyke. Playing with the 2003-born age group, Wright will be one of three 2004-born players at the 2018 GTHL Top Prospects Game, Powered by Under Armour. Wright will be joined by fellow underage players Lane Hinkley (Vaughan Kings) and Adam Fantilli (Toronto Red Wings) on December 11 when he takes to the ice as part of Team Clark-Weaver-Corson.

The 2018 GTHL Top Prospects Game will mark the first time multiple underage players have participated in the same game. Hinkley, Wright, and Fantilli are part of an exclusive club of underage players to have participated in the GTHL Top Prospects Game – Jack LaFontaine, Ryan Merkley, and Jack Hughes were also selected for the game as underagers. LaFontaine and Merkley have been drafted by NHL clubs, while Hughes is a highly touted prospect for the upcoming 2019 NHL Draft.

Fantilli, who is the youngest of the three, says it took him a few weeks to adjust to the speed and physicality of the 2003-born group.

“This is my first year playing as an underager,” explained Fantilli, who will celebrate his 14th birthday the day before puck drop. “The size and speed of the players, as well as the pace of the game was the biggest adjustment.”

The undefeated @03DMF have @JeffMarek and @gerrydee talking. The Minor Midget Flyers will face the Jr. Canadiens on Sunday, November 18 at 9pm at Victoria Village pic.twitter.com/qd5tG0fjkb

Hinkley, who started playing as an underager at the age of 12 in New Brunswick, says the jump to playing up an age group last year was less of a transition due to his experience playing with older players. Being a 2004-born player, he was pleasantly surprised by his selection to the GTHL Top Prospects roster.

“I didn’t expect to make it into the Prospect Game, but it was a goal I kept for myself and just kept working hard,” Hinkley said. “I’m looking forward to getting to play with and against all the top players from the league.”

There are currently four 2004-born players in the Minor Midget “AAA” loop, including the three that will participate in the 2018 GTHL Top Prospects Game, Powered by Under Armour on December 11. Click here to purchase tickets.