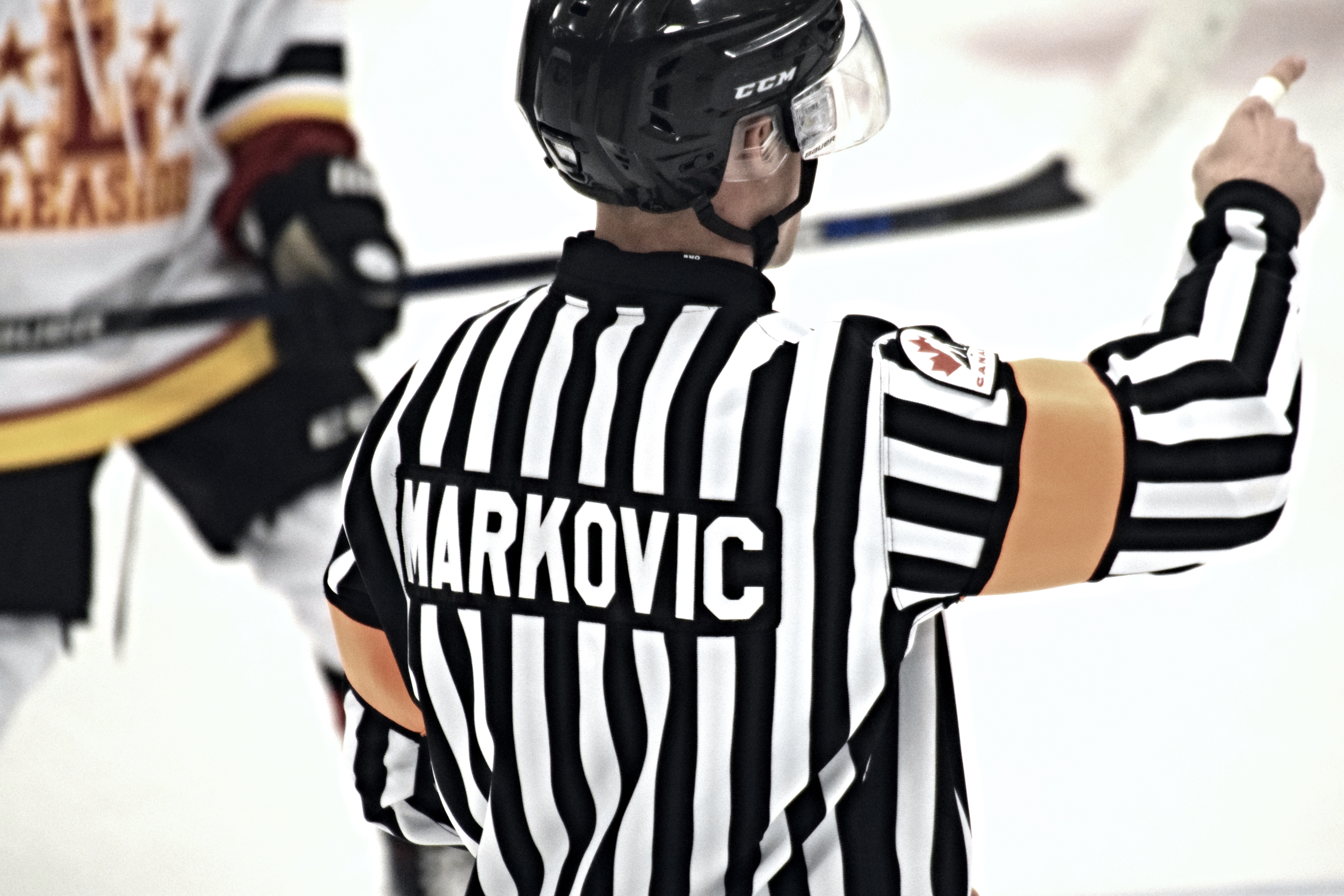 When the time comes for pro hockey players to hang up their skates after dedicating much of their young lives to the game we all love, some choose to pursue a career in coaching, while others test their hockey knowledge in front of the camera.

Michael Markovic had something different in mind. After some encouragement from friends and family, he took to the ice as an official for the first time last summer, calling it “the next best thing to being a player.”

Markovic, who played minor hockey in the GTHL with the Wexford Mustangs, Scarborough Young Bruins and Don Mills Flyers, played five years with the University of Toronto in the CIS before signing a contract with the ECHL’s Alaska Aces. Realizing his playing days were over, Markovic was determined to stay involved in the game.

Breakout caught up with “Marko,” who the GTHL’s technical director of officiating, Steve Wallace, calls “a fast-rising officiating star” between his visits to the NHL Exposure Combine and the OHL Officiating Development Camp.

1) What was your relationship with officials like when you played?

My relationship with the officials was always positive. I never saw the officials as an obstacle to winning. I played centre for my entire hockey career so I made it my business to get to know each linesman throughout the season, and those that know me will still say, “I never threw Marko out of a face-off” even though I may have been cheating!

2) What made you decide to get into officiating?

I ran into Jonathan Wallace [OHA referee and friend] at a GoodLife Fitness one summer and he told me, and I quote, “Marko, your hockey career is over, come and try officiating.” So with a little convincing from my family, I signed up and have never looked back. 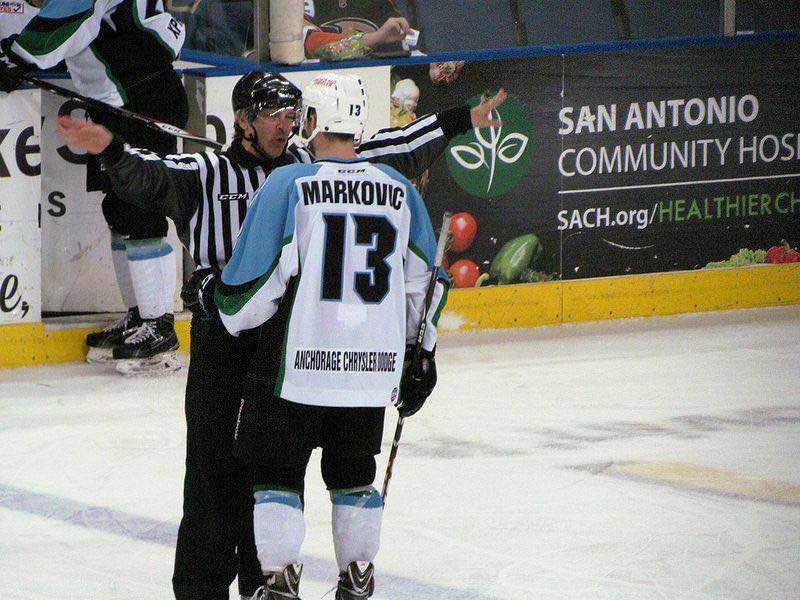 3) Talk a bit about your journey so far as an official.

Like any official it began at the ref school [the Canadian School of Hockey Officiating Referee Summer Camp], learning the basics. From there I was asked to skate in the GTHL where I was fortunate enough to skate some important games like the Minor Midget AAA playoffs, OHL Cup and OHL Gold Cup. This summer I attended the NHL’s exposure combine for officials and the OHL’s officiating training camp, competing for a position as a linesman.

4) What was easiest when transitioning from player to official? Hardest?

I always considered my skating ability one of my strongest assets as a player as well as my knowledge and feel for the game. I can usually anticipate where the puck is going to be, or where it should go, to allow me to be in the best possible position and have the best possible sightline. I know what it feels like to be slashed in front of the net, what it’s like to be hit and want to retaliate and I know from my days as a player how I wanted an official to officiate a game, so I try to blend that with my knowledge of the rulebook.

As a player I thought I knew the rules of hockey. However, I’ve come to realize you know absolutely nothing! The hardest transition for me was learning the rules and the different scenarios of how each rule can be implemented. I still have yet to grasp it all, because as an official you are constantly learning, so any chance I get, I flip through a couple of pages of the rule book to keep it fresh in my mind.

5) Where are you skating this season? What are your future ambitions?

This season I will be skating with the GTHL, OHA, hopefully the OHL, and I was just informed that I will be skating as a part-time linesman in the AHL. My future ambitions would be to make it to the NHL to skate on the biggest stage in the world. 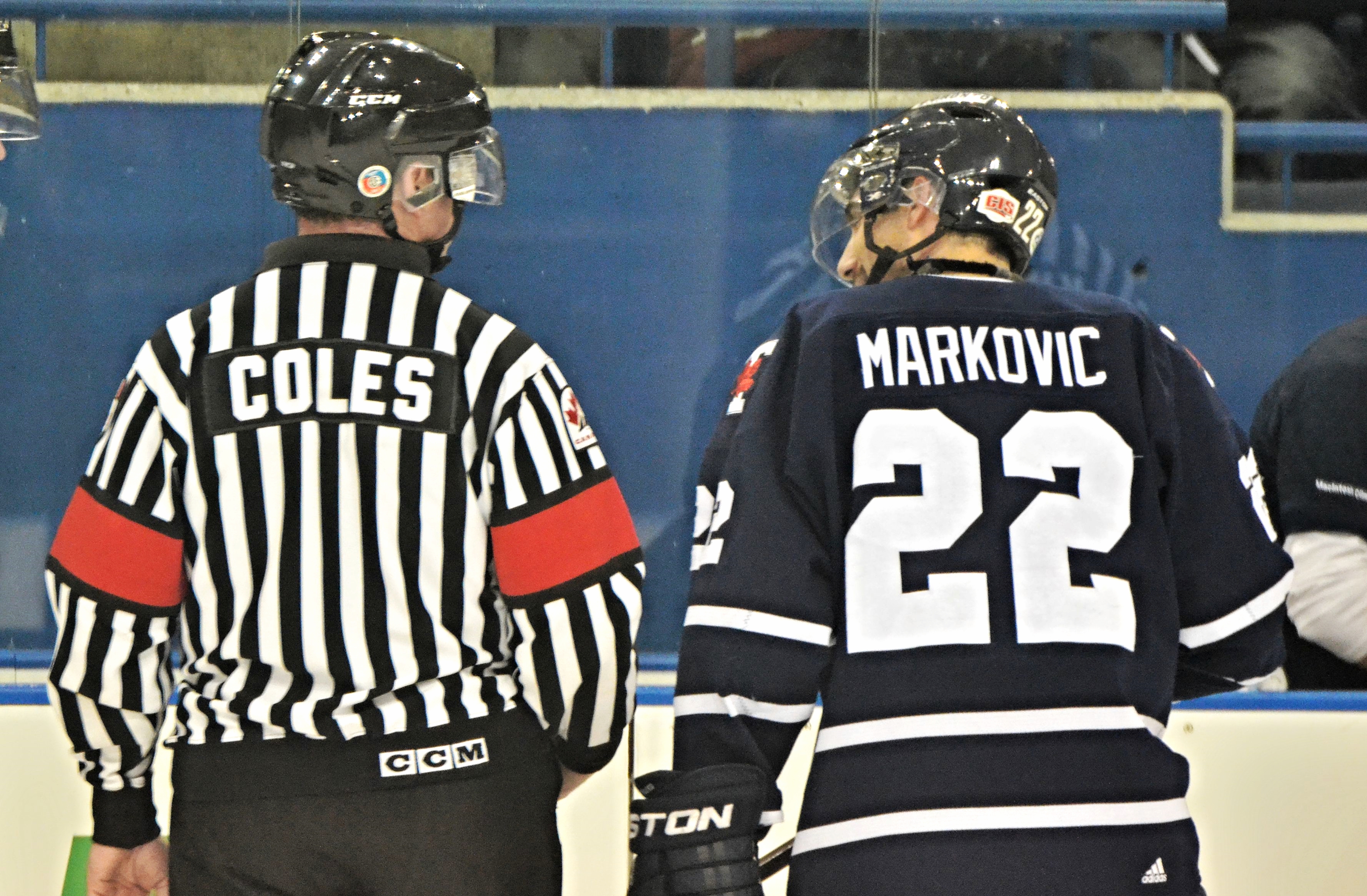 6) Who do you look up to in the officiating world?

The people I look up to in the officiating world would have to be the likes of Greg Kimmerly and Greg Devorski, both of which have had illustrious NHL careers skating over 1000 games each as a referee and a linesman respectively.

7) What advice would you give to high-level players looking to cross over and throw on the stripes?

You need to be in as good or better shape than the players, you need to think like a player, while using your knowledge of the rule book to ensure the integrity of the game stays intact. Officiating is the best way to stay in the game we love. So my advice, give it a shot!

I’d like to thank the GTHL, namely Chris Whiting, Peter Kourtis, Mike Gordon and Rob Brown, for giving me the opportunity to succeed in such a great league. Without them my progression wouldn’t have been possible.

* With files from Chris Ackroyd.