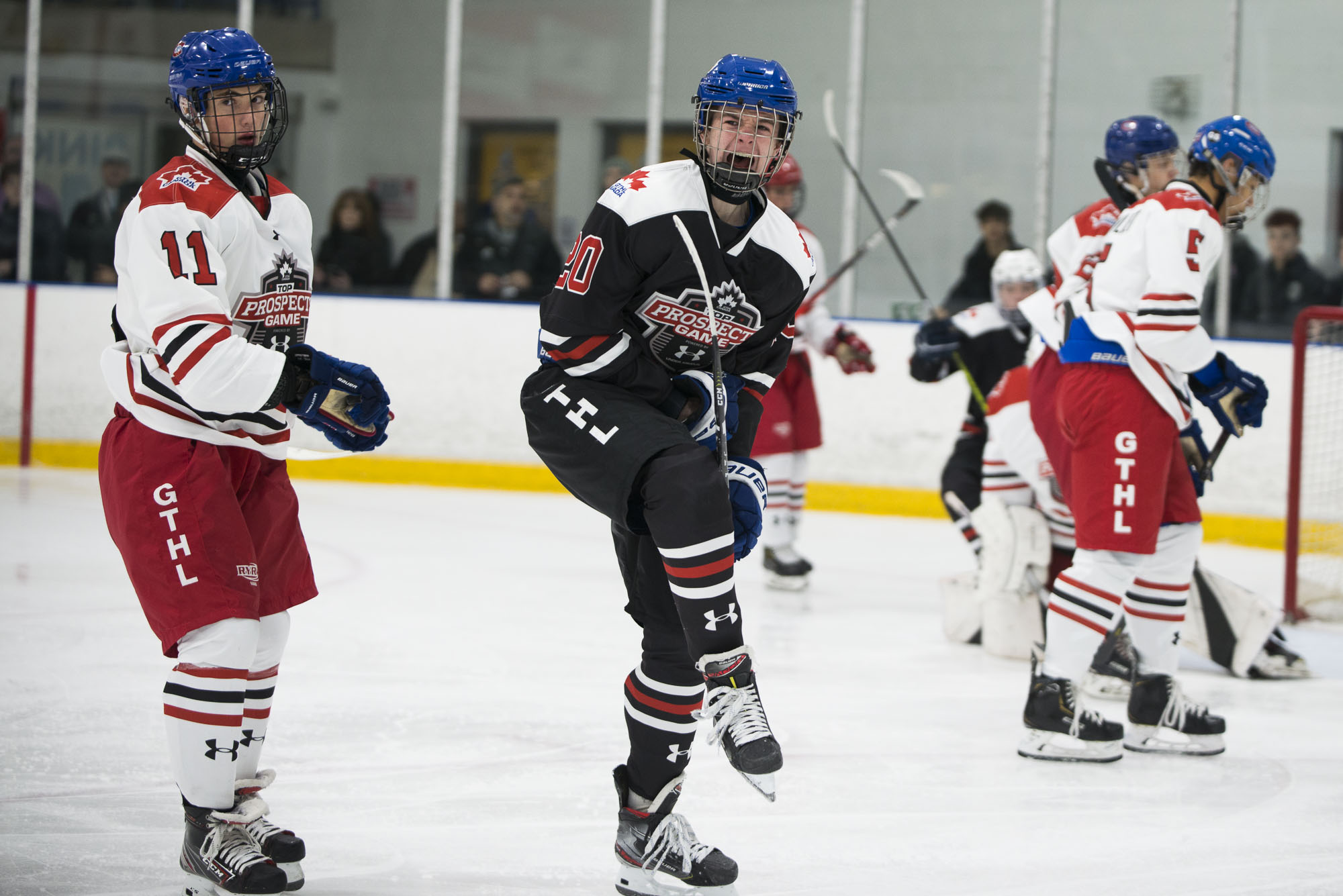 The top GTHL Minor Midget AAA players showcased their talent in front of a standing room only crowd at Scotiabank Pond for the 11th annual GTHL Top Prospects Game, Powered by Under Armour on Tuesday night. After a tight two periods, team Clark-Weaver-Corson exploded for a four goal final frame to win the Top Prospects championship by a score of 6-2.

The first period saw team Clark-Weaver-Corson take a 1-0 lead into the intermission after Ty Nelson (Jr. Canadiens) provided a perfect rebound opportunity for Jake Sederoff (Toronto Titans) to capitalize on.

Following the intermission, Team Clark-Weaver-Corson added to their lead with an unassisted breakaway goal by Lorenzo Bonaiuto (Toronto Marlboros). Responding quickly was Team Stacey-Primeau-Tucker, scoring less than a minute later on a 2-on-1 goal from Luke Devlin (Toronto Marlboros).

With each team aiming to split their goaltenders’ time, Domenico Di Vincentiis (Vaughan Kings) came in for Team Clark-Weaver-Corson around the 10:00 minute mark of the second period, but would fall victim to injury shortly after. Kyle Downey (Toronto Young Nationals), who had already played the first half of the game, came back in to relieve his teammate.

When asked about the composure needed in this moment, Downey said it was an unorthodox situation, but stayed composed for his teammates.

“I felt bad for Dom, you hate to see him go down like that. But I needed to step it up for a player that was hurt. I stayed focused, and was ready for anything that came at me.”

Team Stacey-Primeau-Tucker added a tying goal before the end of the second intermission from Pano Fimis (Jr. Canadiens) before heading into the third tied up at two.

Intermission sparked a fire within Team Clark-Weaver-Corson, as they came out firing with three goals in the first four minutes of the third. When asked about what changed between the end of the second, Ty Nelson said the team came together in the room.

“The boys self-motivated before the third, we just started clicking together,” said the Jr. Canadiens defenceman. “It’s hard when we don’t all play together often, but we found our legs and started producing.”

Coach Mike Weaver added that it took the team some time to find their identity, but when they did, it was more than enough to have an explosive third period, “I was confident in the first period, then a bit uneasy by the second, but in the third we came out pretty strong.”

Rodion Tatarenko (Toronto Red Wings) began the onslaught, followed by a beauty by Zak Lavoie (Toronto Young Nationals) and another by Eli Sebastian (Toronto Marlboros). Kocha Delic (Toronto Titans) added a final goal to seal the 6-2 score and a victory for Team Clark-Weaver-Corson. Coach Weaver added his praise with the team and how quick they bonded together before Tuesday’s game.

“It’s tough to create a team dynamic this quick, and after feeling some adversity in the second the team came together and figured it out in the third. Our team was well-balanced, not just full of skill and talent, but an overall wealth of good hockey players.”

After the game, the MVP trophies were awarded to winning goaltender Kyle Downey on Team Clark-Weaver-Corson, and Pano Fimis, who scored the second goal for Team Stacey-Primeau-Tucker.