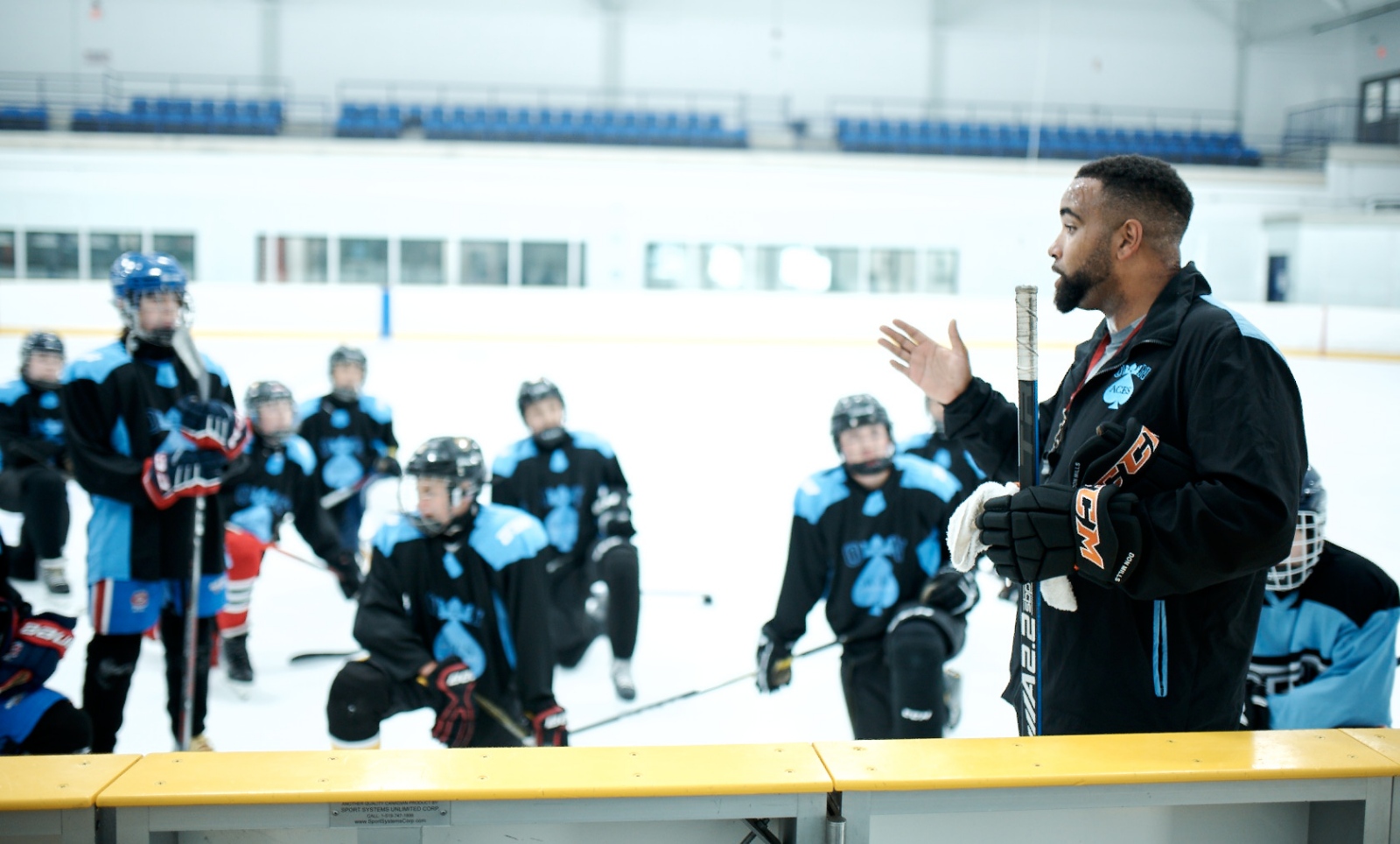 Rane Carnegie was a star junior-hockey player, the grandson of the late Herb Carnegie, and an addict. Today, he’s sober — using his newfound voice to change the game of hockey.

When Rane turned on his television in the spring of 2020 to watch NHL hockey, he saw things differently. The league was promoting diversity and fighting against racism, but nowhere was there an image or a mention of his grandfather, a Black man who changed the sport.

That’s why shortly after, Rane started a petition to get Herb into the Hockey Hall of Fame.

It’s an induction that Rane feels is long overdue.

“Based on his ability (on the ice) and based on what he was able to do back when segregation was still around, it’s asinine to me that he’s not in (the Hall of Fame),” said Rane. “It’s asinine to a lot of people too, we have more than 9,000 signatures on a petition that I started.

“I was sent home from the Plymouth (Whalers in the OHL) for smoking weed at a team party with my teammate, and I was accused. He wasn’t accused, but I was. They automatically assumed (it was me),” Rane explained.

Since starting the petition on July 1 2020, Rane has received more than 9,000 signatures in support of his grandfather, who passed away on Mar. 9 2012.

“I think it’s important that all the stories in history are shared,” said Nathaniel Brooks, a childhood friend of Rane’s and coaching colleague in the GTHL. “I think with what happened in the world last year, it inspired all of us to get more involved however we could, and for Rane, I think this is a big way for him to do that.”

When Rane and Brooks got together for a round of golf in July of 2020, the petition was discussed throughout their day on the course.

“We pretty much golfed with each other every day for the last couple of summers,” said Brooks. “We kind of talk about everything, but (the petition) was a hot topic there for a little while, and I know he’s got a lot of support around it, so that’s really good.”

There are two different ways for someone to find themselves on the Hockey Hall of Fame ballot. The most common method is to have a member of the board nominate whoever they desire, and the second way is through a public submission.

In the case of Rane’s bid to get Herb enshrined into the Hall, the latter is what’s most likely.

“I’ve reached out to a couple members that are on the voting board. I’m hopeful that maybe one of them will pick up my grandfather’s and submit his name on their behalf, but in the interim, we’re assuming that we’re going to have to go through the (public submission),” said Rane.

Having Herb inducted through a public submission is not the ideal method for Rane, and having his grandfather nominated from a board member would make the process more meaningful to him and his family.

“It would be more meaningful for me personally if one of the members has seen what we’re trying to do as a family to get my grandfather the recognition, and they would take what we’ve gathered and run with it,” said Rane. “But we’ll cross that bridge when we get there. We’re a long ways away still, we’re at the beginning stages because of the pandemic.

“When I started the petition on Canada Day last year, I thought that we were going to be celebrating right now that he was going to be inducted.”

Rane is two and a half years sober, after battling an addiction to cocaine. Starting the petition to get Herb into the Hockey Hall of Fame was one of symbols of the new beginning in his life.

At the time of Rane’s struggle with addiction, Brooks was the coach of the U13 AAA Don Mills Flyers in the GTHL, and when it was time to name who would be on his staff for the next season, he thought of Rane right away.

“As a long-time friend, I felt like I could help him,” Brooks said. “I think him coming in and coaching with me was so huge in his road to recovery. The main thing for me was helping him out of his situation. That’s how I could help, and that’s what I did.”

Despite the past darkness in his life, Rane is determined to write a new beginning by being an advocate for inclusion in hockey and by being the best coach he can.

“It’s OK to have a bad day, and it’s OK to be who you are. My grandfather always told me that for every negative thought, there’s always a positive, and you just have to have the strength and perseverance to battle through.”

Prior to joining Brooks’ coaching staff with the Flyers, Rane was on his way to recovery, but discovering his love for being behind the bench solidified his belief that the past darkness was behind him.

“I don’t know if I would call (coaching) the first part to recovery, but I do know for a fact that it was a big part for him,” said Brooks.

Rane has since fallen in love with coaching hockey.

“Realizing that our voice matters, and to see the development of those young men and the camaraderie between the families…it’s something that I’ve never been a part of before,” Rane said.

It’s that same development on the ice that he hopes to see from his 11-year old son in the coming years.

“He really enjoys the game and I’m excited to see how far he can take it,” he said. “I just really enjoy the game, the sport, and the things that you learn from being involved. I think it’s all just so transferable to life, so I can’t wait for us to get over this pandemic, and get back to normal.”

Herb’s impact on the Black hockey community and the legacy he left on the sport was something that Rane wasn’t aware of as a kid. But after seeing the North Centennial Centre get renamed to the Herbert H. Carnegie Centennial Centre on May 2 2005, he finally understood how special of a man his grandfather was.

Sixteen years later, the former junior-hockey star is taking that realization and turning it into an opportunity to honour his late grandfather.

“There’s a time in your life when you start thinking about who you are, and what impact you want to make in the world, and I think Rane has come to that realization in his life that he wants he pay it forward,” said Bernice Carnegie, Rane’s aunt, and the co-author of ‘A Fly in a Pail of Milk: The Herb Carnegie Story’.

Everything Rane is doing now is centred around the values that his grandfather chose to live by, through both hockey and community initiatives.

“Looking at what his grandfather has done, and how he can make a difference himself, (Rane) wants to see that his grandfather is recognized for how difficult it was to actually take on the career choice that he did,” Bernice said. “There just wasn’t a large Black population back then so you were forced to find your own way.

“(Rane) now has a sense of how amazing it was that his grandfather actually navigated through racism, and still came out on top and was successful.”

Bernice sees a lot of parallels between him and Herb — just like his grandfather, Rane has made the conscious effort to make an impact within his community in his mid-30’s.

“There are just so many things that are so similar in their lives, and at the times that they’re happening,” she said.

But the similarities between the two were not evident to Bernice until recently.

“(Herb) fought for everything that he got. I didn’t see Rane being like his grandfather until recently.”

Today, the former CHL forward spends his time being a father, coaching in the GTHL, running a big-brother program called Own Aces, named in homage of his grandfather’s hockey school, and co-hosting the minor-hockey podcast “Part of the Game”. The purpose for his actions follow a familiar theme — to help others who may be going through the similar experiences he did in the past.

The 35-year-old’s podcast is a source for parents, players, and coaches on how to navigate through the world of minor-hockey, through honest storytelling.

“We’re just trying to educate parents and young athletes that are going through their hockey experiences on what to expect,” Rane said.

Having a grandfather like Herb helped Rane navigate through the struggles of playing minor and junior hockey in Canada as a Black person. His grandfather’s presence in his hockey life is something that the former GTHL forward wishes he utilized more to his advantage.

“I think a lot of teenagers fall into this trap of taking their grandparents for granted, and that’s how my relationship was with them at that time to a certain extent,” said Rane. “I wish looking back on it in hindsight, I wish I would have utilized my grandfather’s experiences, his knowledge and his love for the game of hockey to more of my advantage.

“It’s something that I’ll forever be angry with myself for, but it’s out of my control now, and I know that my grandfather is proud of the man I’ve become now.”

Today however, being just like his grandfather and carrying on the legacy that he left motivates Rane in all the facets of his life, including coaching kids in the GTHL.

It’s phrases like this that contribute to his philosophy when speaking to one of his players during a late-night practice at the local rink.

“Number one, be a good person,” said Rane. “Number two, have a great work ethic. Number three, have fun.”