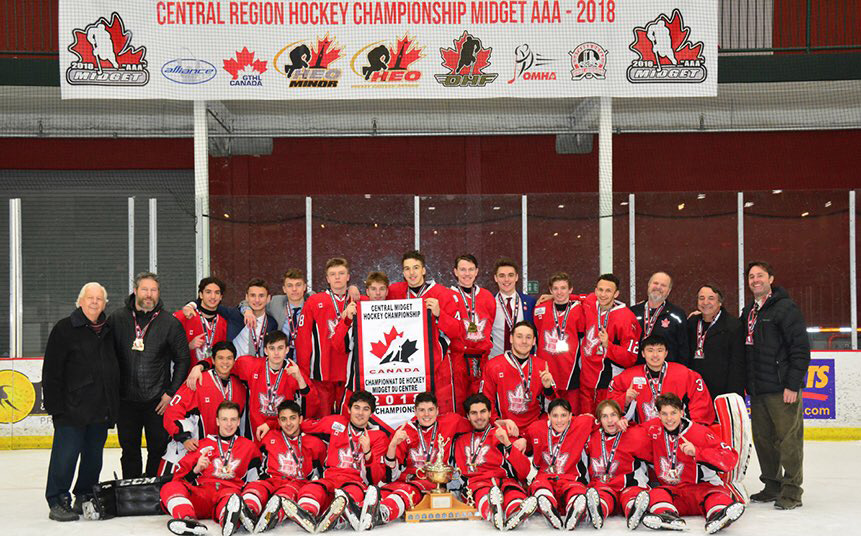 Toronto Young Nationals centreman Chris Pappas knows about everything that can go wrong during a championship series. Falling to the Mississauga Rebels during the 2016-17 Scotiabank GTHL Playoffs, Pappas and the Nats Midget team are now headed to the 2018 Telus Cup in Sudbury with the goal of claiming what was lost last season.

“This team has a unique structure in the sense that any player has the capability do to anything, allowing our team to use the large roster to our advantage,” explained Pappas.

The Nats depth played to their advantage during the Central Region Midget “AAA” Championships where they were able to defeat Ajax-Pickering Raiders in the gold medal matchup. Three players on the roster were drafted at last year’s U18 OHL Priority Selection, while Nats forward Markus Paterson was selected second overall during this year’s draft. Nine of the 20 players on the roster were drafted out of Minor Midget during the 2017 OHL Priority Selection, including winger Austin Brimmer. Excited to head to Sudbury, Brimmer is confident the Nats will give it their all during the tournament.

“Every player on the team wants to win and he doesn’t take losing as an answer,” said Brimmer. “As a team, we are willing to do whatever it takes to win whether that means blocking shots, taking a hit or giving it a 110% effort always.”

The Nats will be in competitive company during the week-long event. While the Nats will be representing the Central Division, they will be matched up against the Moncton Flyers (Atlantic), Cantonniers de Magog (Quebec), the Notre Dame Hounds (West), Lethbridge Hurricanes (Pacific), and Sudbury Wolves (Host).

“I’m looking forward to playing against the best competition that Canada has to offer at the Midget level and to be able to represent my city and province,” said Brimmer. “Also, I am looking forward to all the media and the chance to play on national television.”

The Nats will look to become the first GTHL team to win the championship since the North York Rangers in 2016. The Nats won the previous year with a team featuring several elite talents, including Soo Greyhounds defenceman and Detriot Red Wings prospects, Jordan Sambrook.

The 2018 Telus Cup kicks off on Monday, April 23. Fans can tune into the tournament on TSN. Visit official Telus Cup Website for more details.