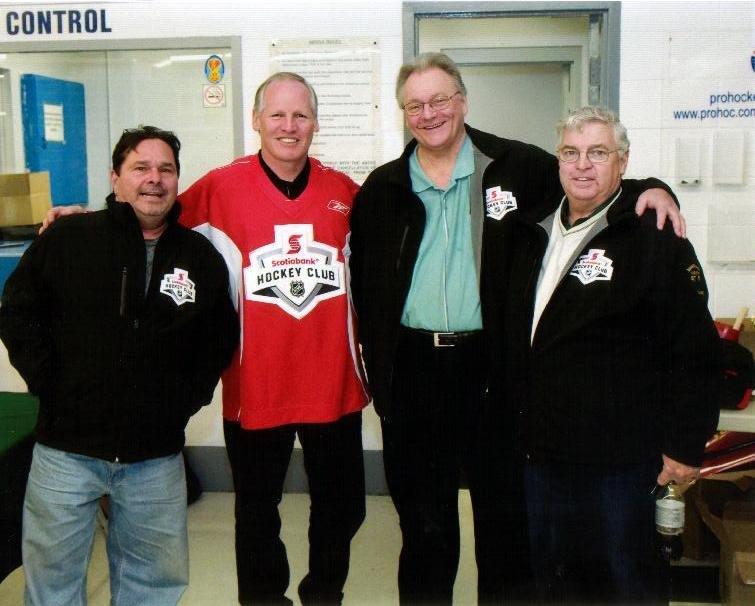 Gord Murphy (Mississauga Blackhawks), Peter Johnson (Mississauga North Stars), Joe Schembri (Mississauga Terriers) and Lloyd Stockley (Mississauga Jets) are set to be inducted into the Mississauga Sports Hall of Fame on June 8. In honour of this achievement, the GTHL will be profiling each of them individually leading up to the event.

Long before formal tryouts or player cards, teams in what was then the Toronto Hockey League (now the GTHL) were simply left to assemble themselves. Working at Loblaws at the time, Peter Johnson brought a bunch of part-time employees together to join a Juvenile division team. He took on the role as manager.

It wouldn’t be until the mid-70s until Johnson would find himself back in the GTHL, this time as a parent. With three boys in the League, Johnson signed on to be a team manager for his son who played for the Mississauga North Stars. At one particularly eventful meeting, Johnson recalls the entire North Stars executive committee simultaneously announcing their resignation.

“I said this is crazy, we can’t let the club go down and I ended up with it by myself,” explains Johnson. “I talked one of them staying for a year and I became General Manager.”

Johnson, who remains the General Manager to this day, will be inducted alongside fellow members of what has been labeled the “Mississauga Mafia.” Made up of the four General Managers from Mississauga’s AA clubs, the foursome was born out of discussions surrounding the challenges of running a hockey organization.

“It started out that we were in friendly competition and there was no formal relationship there,” explained Johnson. “We got to talking about our mutual problems like recruiting and fundraising and we got the idea that why don’t we get together and run a tournament.”

The four now run the Mississauga Early Bird tournament, which is headed into its 50th year this season. In 1995, the organizations all worked together to start up the Mississauga Rebels before turning it over to a new management group. The Rebels name was a play on the Mississauga Mafia label.

“We named ourselves the mafia, that’s our name,” said Johnson. “It’s symbolic of attitude we had which was that we had things to say and if you didn’t like it too bad.”

To this day, those who work closely alongside Johnson would agree that he doesn’t shy away from speaking his mind.

“At many times over the past 20 plus years, Peter Johnson has annoyed club members with his persistent attention to detail,” joked Mark Turkiewicz, Vice-President of the Mississauga North Stars and long-time coach. “Peter truly has been the leader representing Mississauga well within the League. He’s built many bridges with the City and resources throughout the league and community that has earned the North Star club an enviable reputation.”

After taking some time to enjoy his special recognition, Johnson hopes to remain with the North Stars and continue building on the foundation he’s set. Johnson will be inducted into the Mississauga Sports Hall of Fame on June 8.

Break the Ice With Your Team
1 day ago