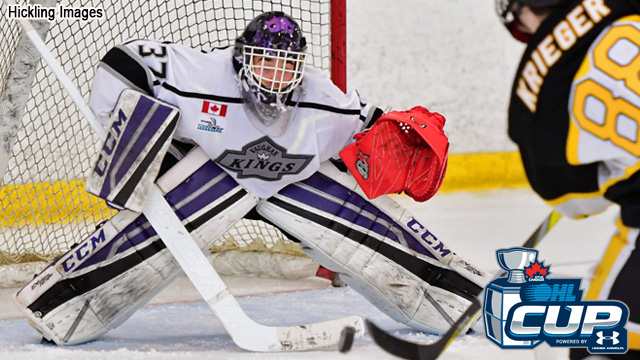 Whitby Wildcats vs. Toronto Titans | Wildcats win 3-1
The Toronto Titans started off the final day of round-robin action with a 3-1 loss to OMHA champs, the Whitby Wildcats. Titans forward Alex Dominique opened up scoring with a powerplay goal in the first, however, the Titans would fail to answer three second period Whitby goals. The Titans will play NOHA at 3:00 p.m. in their final game of the round-robin.

Mississauga Senators vs. TPH Hockey | TPH win 5-1
The Mississauga Senators ended their OHL Cup round-robin run on a losing note. The early morning loss to TPH eliminated the Sens from quarter-final contention. The Sens failed to record a win in their four tournament games.

Waterloo Wolves vs. Vaughan Kings | Kings win 4-0
The Vaughan Kings helped earn goaltender Christian Sbaraglia a shutout win in their final game of round-robin competition. The Kings finished second in the Lindros division with a 2-0-2 tournament record. They will face the Mississauga Rebels in the quarter-finals.

Brampton 45s vs. Toronto Jr. Canadiens | 2-2 tie (OT)
A late third-period goal crushed the Jr. Canadiens hopes of securing a spot in the quarter-finals. A win by TPH later today would eliminate the Jr. Canadiens from contention. TPH will be taking on the undefeated London Jr. Knights.

Quinte Red Devils vs. Toronto Young Nationals | Nats win 4-0
After opening the tournament with a loss to the Rebels, the Nats bounced back to win three straight, earning them a spot in the quarter-finals on Saturday. The Nats will face off against the undefeated OMHA champs, the Whitby Wildcats.

Eastern Ontario Wild vs. Mississauga Reps | Reps win 5-3
A pair of unanswered goals in the second and third periods helped the Mississauga Reps secure the top spot in the Shannahan division. The Reps will face the second place team from the Subban division in the quarter-finals at 10:30 a.m. on Saturday.

NOHA vs. Toronto Titans | NOHA wins 3-1
The Toronto Titans finished their OHL Cup stint with a 1-3-0 record after a loss against NOHA – a team who finished the tournament undefeated, (1-0-3) but failed to qualify for the quarter-finals.