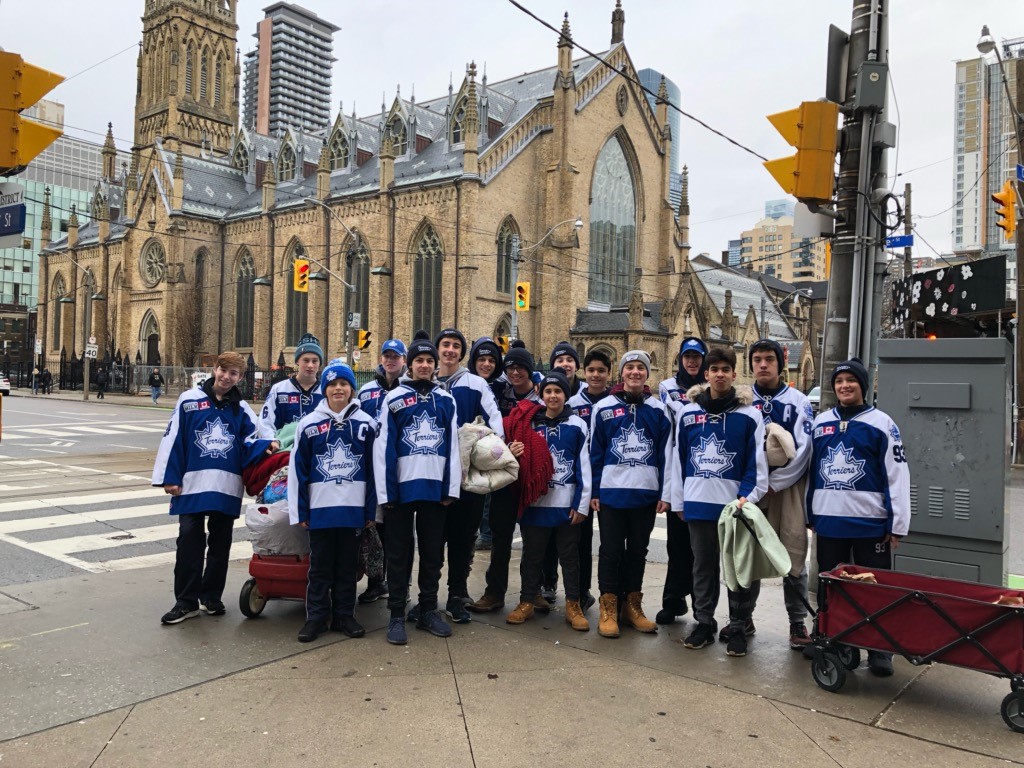 On an unusually warm Sunday afternoon late in November as the calendar turned towards the Christmas season 17 Bantam Terriers, dressed in their blue jerseys, were the centre of attention in Toronto’s Moss Park.

Few of these boys had ever been there; Moss Park is a long way from the neatly manicured lawns of Mississauga.  Talk to real estate agents and you will get the story of gentrification, of new developments. Talk to first responders on the graveyard shift and you’ll get a different story.

t was the real life grit of the area that drew the Terrier families and kids to the park.  In mid-morning they arrived, parked their vehicles and set up a table in a place that was easily seen.  They carried lunch bags filled with peanut butter and jam sandwiches, a granola bar and some fruit. Five from every family on the team.

Taking up most of the space were the 250 blankets donated by moms, dads, grandparents, players and friends. Imagine how important it is to stay warm when you’re struggling to sleep under a tree when the temperature is below the freezing point.

Some of the players hung back and stood around the table to hand out the necessities of street life that they had painstakingly collected.  Others were more adventurous and wanted to learn about the neighbourhood and the people, so they wandered off in different directions while handing out the food bags and the blankets.

Wherever they went they were greeted with smiles and warm greetings.

To many of us the cold weather of the winter season is a reason to tell stories about great toboggan runs,  sitting by a warm fire sipping hot chocolate or snowmen and snowball fights.

Many who live in Mississauga are unable to share any of those moments of nostalgia.  Their goal is to fend off the biting cold in ill fitting jackets as they search out a place for a hot meal.

On Fridays during the winter cold some of these people come to St. Mary’s Sea of the Sea Church basement in Port Credit for a meal consisting of soup, a main course, desserts, and followed with a warm beverage.

This year 120 care packages have been put together by the Minor Bantam Terriers.  Fifty for women, 50 for men and 20 for children. The care packages are filled with new hats, mitts, socks, snacks, toothpaste, toothbrushes, shampoo, razors, deodorant, and soap. In addition to this there are used coats and sweaters for the guests.

Some of these care packages will include toys donated by members of the Terrier’s hockey family.

Ever since 2005 the Terriers have have  hosted a holiday pizza night for all of the players.  It happens over two Mondays, but it’s more than free pizza and drinks.

It started in the days when we paid admission to the rink.  The deal was that on pizza night the Terrier’s covered the admission fees, provided pizza and soft drinks in return for a Christmas toy.

Over the last 14 years that has meant somewhere in the neighbourhood of 3,000  toys have been donated to the CP 24 CHUM Christmas Wish program.

This year alone more than 380 gifts were donated.