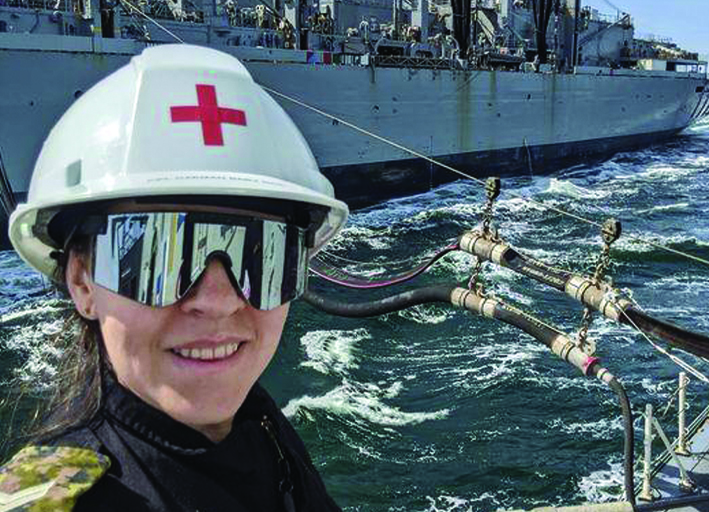 “It’s a time to remember those who came before us and those who are currently serving,”
November 10, 2021
by
Stephanie Coratti
GTHL Community

Currently based out of Halifax, Nova Scotia, Laura has been serving in the military for almost 10 years now.

A Medical Technician and Corporal of the army, Laura is a purple trade – meaning it doesn’t matter what element you are, your trade can be interchanged between elements – which is how she finds herself serving the navy today.

The inspiration behind enlisting goes to her older brother, Wiliam.

“We were the same age [27] when we joined – we’re six years apart, so I joined six years after he did,” Laura shared. “I remember at first, I thought he was absolutely insane for joining because I mean, my mom’s dad was in World War II, but other than that we don’t come from a military family.”

Leading the way for the sibling duo, William started in infantry for eight years, completed a tour on the frontlines in Afghanistan, served the Haitian earthquake relief mission in 2010, and is now currently serving as a Personnel Selection Officer. In this role, William can do recruiting, help people when they’re on their way out of the military to help guide them back to civilian life, while also guiding people who are in the military to find a more personally preferred trade.

“I remember going to his basic training graduation and I really liked the dynamic, seeing how they worked together and the comradery,” Laura continued. “It took me a couple years – I did go to college for something completely unrelated but it was definitely something I started looking into.”

Laura’s last question mark was what trade she wanted to go into, with her brother providing the answer once again.

“The most medical I got, I worked at a vet office for CO-OP in high school,” Laura laughed. “My brother suggested medic and that’s how it all started.”

A few years later in 2017, Laura and William lost their mom.

“My mom was not good when my brother was in Afghanistan so I was really concerned for myself – I’m the youngest and the only girl, she wanted a girl so bad,” Laura shared. “But she passed away in 2017 and then in 2018, I got posted out east. I don’t know if I would have been able to come out here if my mom was still around – she would not have liked it.”

Making the most of life’s path, Laura sees so much in where she is today.

“I work with a lot of great people – it’s a really, really good crew and I actually love sailing,” she said of what she loves most. “You work on the ship every day but right now we’re working alongside getting ready for another deployment so there’s a lot of extra work in getting medicals for guys who are expired, making sure everyone has their immunization and yearly dental, but while we’re sailing you have sick parade [walk-in-clinic] hours pretty much after every meal, and we’re open 24-hours if anyone ever needs something, but I absolutely love sailing and I don’t want to leave.”

On the other side of the coin, being away from family offers its own set of challenges that many might not realize – especially during a pandemic.

Laura continued to share how testing, not being able to port in many places while deployed, and the extra responsibility from vaccinations that came with being a medic added struggles to serving during COVID-19 – including finally docking in Halifax after being deployed for several months, only to be unable to get off the ship due to two positive tests.

The challenges, however, don’t measure up to the significance that comes with Remembrance Day and what Laura hopes people think about on November 11 every year.

“Go to a ceremony – most workplaces are pretty understanding about stuff like that and even if you can’t go out in person, there’s always virtual ceremonies you can do,” Laura said. “The other big thing – I remember before I joined, I was working at a retail store and at 11 o’clock, I was observing a moment of silence and people started talking to me. Just be respectful and give a minute of your time to think of so many people.”

The true symbolism of Remembrance Day is important for Laura, too.

“People think Remembrance Day is supporting war – it’s not at all,” she said. “It’s supporting the people who went to war, especially in World War I and World War II when they didn’t have a choice. We lost so many then, we lost so many in Afghanistan, and as a medic, I see it all the time where we lose people after they come back.”

Laura shared the loss of a close friend to suicide in 2018 – someone who, after becoming a part of his family following his passing, she thinks a lot of on Remembrance Day. As well as another really close friend who was tragically lost in a training exercise in 2017, highlighting two very important perspectives of what all of those who serve sacrifice daily.

“It’s just a time to remember those who came before us and those who are currently serving,” Laura said simply.