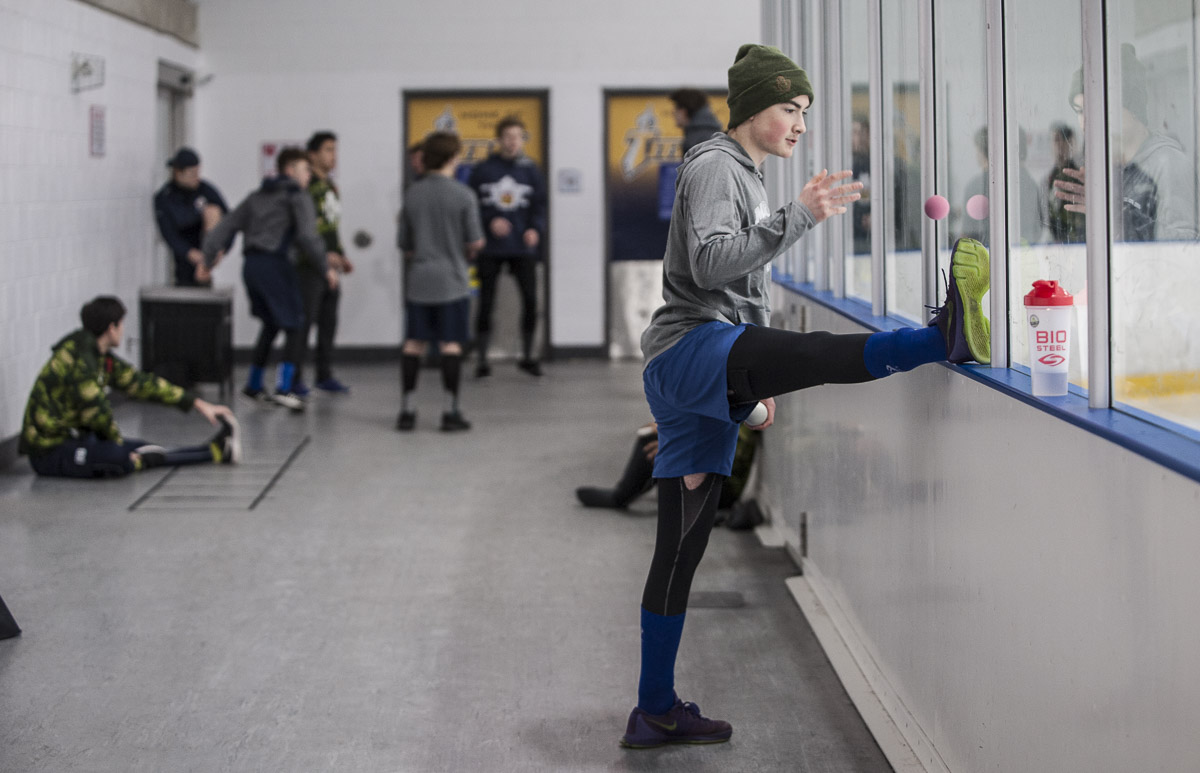 A growing body of scientific evidence suggests that milk – white and chocolate – may have an important and beneficial role in the context of sports nutrition.

Research to date suggests that milk may be as effective as or even more effective than commercially available sports drinks as a rehydration beverage after endurance exercise (like hockey or running). As well, drinking milk appears to result in favourable acute alterations in body composition following resistance-related exercise (like weight training). The mechanisms associated with these benefits remain to be clarified, but are likely related to milk’s overall “nutrient package.”

That “nutrient package” is loaded with water, electrolytes (especially sodium and potassium), protein, carbohydrates and lipids.

The Evidence
There is growing scientific evidence to support the use of low-fat milk following exercise by both individuals and athletes who habitually undertake strength or endurance training. So, if you’re on the ice, at the track, or in the gym a few times a week, milk might be a hydration solution.

In the case of chocolate milk, some performance data suggest that it is as effective as commercially available sports drinks in facilitating recovery post-endurance exercise. More well-controlled studies are needed to measure just how much of an impact milk has in promoting muscle glycogen recovery (i.e. muscle tissue repair).

Other studies have yielded acute and long-term evidence to support the use of low-fat milk as a post-resistance exercise beverage. Consumption of low-fat milk can also contribute to greater gains in lean mass and muscle hypertrophy – in other words, helping increase strength for those battles in the corner.

Resistance Exercise
A randomized controlled trial at the University of Texas Medical Branch examined 24 healthy young volunteers who had not participated in regular resistance training for at least five years prior to the study. They looked at how the body reacted to three different types of milk beverages: whole milk, fat-free milk with a similar caloric value to whole milk, and fat-free milk.

The results showed that all three milk groups resulted in an increase of net muscle protein synthesis after resistance exercise, meaning they got bigger and stronger. While milk isn’t the only solution for refueling, it has been shown to be most efficient. Analysis of other research suggests that milk consumption yields better post-resistance exercise results as compared to soy beverages.

Endurance Exercise
In another randomized controlled study, the effects of three beverages consumed during recovery from prolonged endurance cycling was examined. Nine trained male cyclists, with a mean age of 25.4 years, completed three experimental trials in which they consumed chocolate milk, a fluid replacement drink, or a carbohydrate replacement drink.

Similar studies have found that time to exhaustion and total work were significantly greater for those who consumer chocolate milk. Another bonus for when crunch time rolls around is that chocolate milk can lead to fewer bathroom breaks than sports drinks.

The moral of the story is that a growing body of scientific evidence supports the use of milk, including lower-fat milk and chocolate milk, as an appropriate, and maybe ideal, recovery beverage post endurance and resistance-related exercise. So grab a glass of the good stuff.

You get home from a grueling game, exhausted. You were battling for every puck and digging in on every stride – your body needs a break. It also needs a refill.

You go to the fridge and are greeted with two options: milk or chocolate milk. How do you choose? If your hand gravitates toward that brown container, let it. As it turns out, chocolate milk has the same 16 nutrients as white milk, including all its calcium and vitamin D. As part of a healthy diet, it can help you meet Canada’s Food Guide recommendations for Milk and Alternatives.

Getting enough daily servings of milk products is essential for many health benefits including strong bones and healthy teeth, and is especially important for children whose bodies are still growing.

Research shows that kids choose chocolate milk instead of other sweetened drinks and therefore end up drinking more milk in general. The result is that children and teens who drink chocolate milk have a better overall diet quality than those who don’t. And, they weigh no more than their non-chocolate-milk-drinking peers.

Chocolate milk contains no more sugar than unsweetened apple juice and only a very small amount of caffeine found naturally in cocoa. Its balance of protein and carbohydrates makes it an ideal post-workout recovery drink. As widely loved as it is, chocolate milk accounts for only seven percent of milk consumption in Canada and for less than one percent of our added sugar intake.

Knowing what makes up your food and drinks will help you be at your best, from both a health standpoint and from an on-ice performance perspective. If you reach for the chocolate milk after a solid workout or high-tempo game, know you’re helping your body recover.

So go ahead and fill ‘er up, buttercup.

Check the facts at dairygoodness.ca/milk/all-about-chocolate-milk