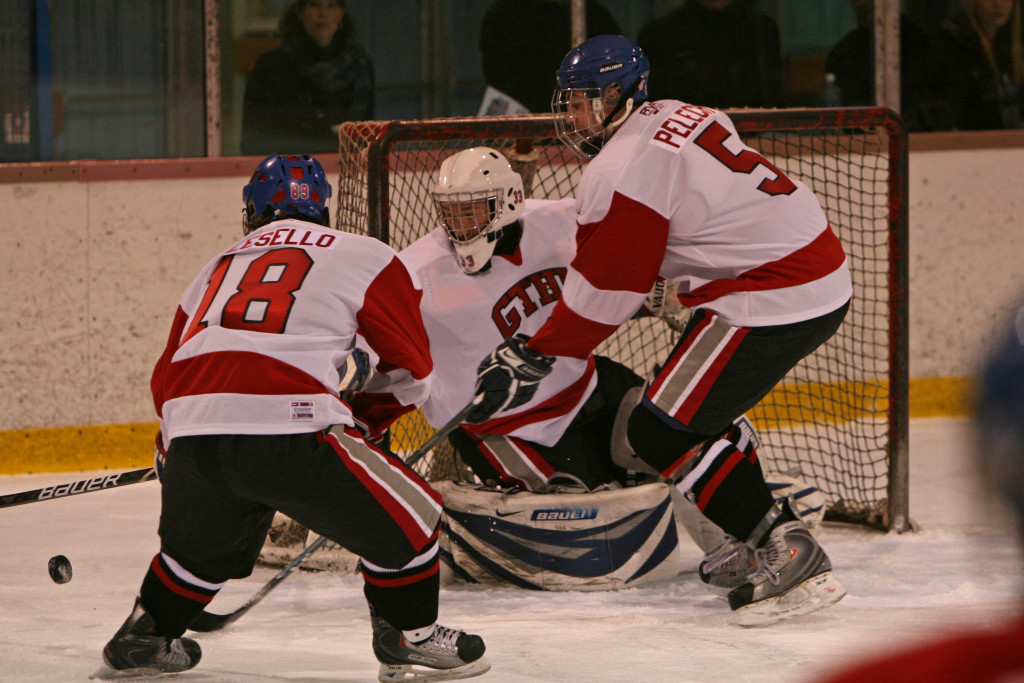 Washington Capitals forward Tom Wilson and Philadelphia Flyers centre Scott Laughton frequently joke about the night of January 22, 2010. Now both known for their physical style of play, the two started to really mold their craft well before their NHL debuts.

During the 2009-10 GTHL season, Wilson, a forward with the Jr. Canadiens, and Laughton, a key piece of the Toronto Marlboros roster, had a heated rivalry as the teams battled it out during the regular season. As Herb Carnegie Arena filled with parents, relatives, and friends of players to witness the first-ever GTHL Top Prospects Game, the game ended with an unexpected tilt between Wilson and Laughton. Here’s what many recall from that night almost 11 years ago.

What do you remember most about that night prior to the fight?

Joshua Chapman (Wilson’s Jr. Canadiens teammate): All I can remember looking back at that game was how thankful we all were to be a part of the first GTHL all-star game. I remember the vibes in the dressing room. It was always funny to see guys who you’ve played against sitting across from you as a teammate for one night. Also the nerves and just knowing how many OHL/NCAA scouts would be in the stands to watch the GTHL’s best battle it out for a game.

Peter Kourtis (GTHL General Manager and Rogers Broadcaster): Once we got to puck drop it was all positive and the players were so excited to have TV cameras, news outlets and NHL alumni on the bench. It went so well that some parents felt we should hold a game for every age group. I had so many notes on the best 40 players that I wanted to include in the broadcast but just couldn’t squeeze them in. It was so cool to see the players get so pumped for the game in the hallway before puck drop.

Michael Gordon (referee): The atmosphere at Herb Carnegie was incredible. I feel like the players fed off that energy and the pace of play were high. I also recall a lot of scoring chances. This was not unlike NHL All-Star games I’ve watched.  The skill level of all the players was so high, scoring chances and goals were expected.  However, unlike the NHL, the players were being physical.

How heated was the Marlboros and Jr. Canadiens rivalry that year?

Peter Kourtis: The rivalry overshadowed by the Toronto Young Nationals who had the best team in the loop. It seemed like everyone hated the Nats that season. Their team was phenomenal.

Tom Wilson was a scoring machine in his U16  season, something that you have started to see in his NHL game recently. He still played a physical game and had a few PIMs to show for it. Scott Laughton was also a phenomenal scorer in his OHL draft year but also was out on the PK regularly.

Joshua Chapman: “Heated” is certainly put in nice terms. The rivalry in which we (the Jr. Canadiens) had with the Marlies was similar to the classic match up of Toronto vs. Montreal. We hated each other in the heat of competition.  I’m sure there were countless occurrences that ruffled some feathers over the course of that season, but nothing quite like the Wilson and Laughton fight.

What was your initial reaction upon seeing the two players start fighting?

Peter Kourtis: I totally felt the players may have waited to such a late part of the game to have a fight to enhance their physicality and not miss much of the game.  I think at one time I went from thinking it was staged to maybe believing it was a well-timed heat of the moment event that young players wanted to highlight their toughness. The funny part is both of them already had that skill trait on their report, they were the last two players that needed to fight to prove their toughness.

Joshua Chapman: It was 100% spur of the moment. To put it simply, I think the entire bench, and quite possibly everyone who was at the rink that night was in a state of shock. I’ve witnessed one fight during my minor hockey career before playing professionally and it still goes down as a fight I’ll never forget.

Michael Gordon:  I was shocked at first, but not surprised.  I was in shock because, in a game like that one, I did not expect any fights. As I mentioned previously, I entered the game not expecting to call many penalties.  I also thought, about the game being televised on Rogers and the platform the event created for the GTHL, I was the referee who was on the ice, and had a fight in an All-Star game.  Lots of fellow officials for the rest of the year joked with me about that.

Keven Wilson (Toms father): In some ways, it was a fairly safe inauguration for two physical players who would be going to the OHL where fighting was, but is no longer, a regular occurrence, but their parents were certainly surprised when the gloves were dropped.

What was the fallout?

Keven Wilson: They spoke on the phone after the game and both really played it down. You don’t get much from boys at that age.

Peter Kourtis: The President of the GTHL, Mr. Gardner did a review of the fight and they did miss the following league game. Mr. G wasn’t upset but he told them that they couldn’t expect to have a fight and not receive a suspension. Mr. G did have a good sense of humour about it at the time. I think he actually met with the players to discuss the fight.