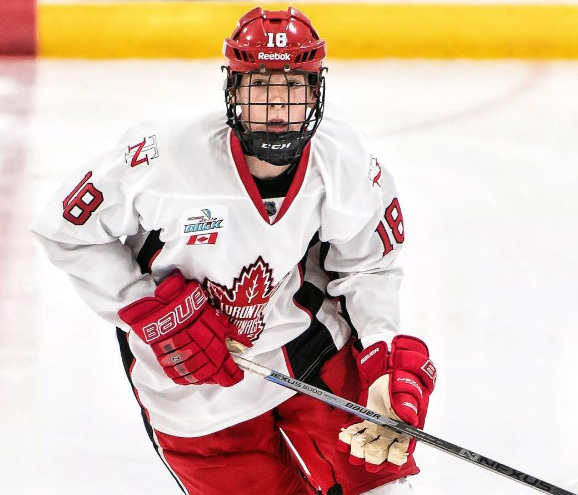 by
GTHL Staff
ohl cup powered by under armour

Connor McDavid, John Tavares, and Mitch Marner are just a few of the many former GTHL players who were once high draft picks in the OHL Priority Selection. Now just a couple days away from the 2017 OHL Cup powered by Under Armour, some current GTHL Minor Midget AAA players are hoping to follow in the footsteps of the superstars that came before them.

“The lead-up to the draft has been a really exciting time and it’s something I’m really trying to take in,” said Mason Primeau, a forward with the Toronto Young Nationals and son of former NHL player Wayne Primeau. “My Dad has been a huge influence on me. I think a big part of why I’ve done well up to this point is because he’s taught me so much about what it takes, not only to be a good hockey player, but a good person.”

Mason found much success throughout the season, first named one of the MVPs of the GTHL Top Prospects Game powered by Under Armour, followed by winning the Kraft Cup with his Nats team. His focus now remains on a potential OHL Cup run.

“As of now, my team is still in the hunt to enter the OHL Cup so my focus is primarily on that,” said Mason, whose Nats team was eliminated from the Scotiabank GTHL Playoffs in the first round. “I try not to think too much about the draft knowing that it’s out of my control.”

“I don’t look at it [being a potential top pick] as motivation. I just try to have fun every time I step on the ice,” said Hughes, who will be competing against in the OHL Cup for his second consecutive year. “I have my own level of expectations, I want to be the best that I can be and try to help my team win.”

For Vaughan Kings defenseman and GTHL Top Prospect Thomas Harley, preparation for OHL Priority Selection has been ongoing throughout the season as he focuses on getting better both on and off the ice.

“The tournament [OHL Cup] is the last look for OHL teams before the draft, so you want to play well so you can improve your draft stock,” said Harley. “The tournament itself feels like it’s on steroids. The teams are better, the crowds are larger, and the stakes are higher.”

Toronto Marlboros forward Graeme Clarke can confirm Harley’s feelings having played in the OHL Cup last season as an underager.

“Last year, playing as an underager, I really got to see what it was like for a player in their draft year.  Minor Midget is a lot different than any other year of minor hockey. The hockey is just more intense since everyone knows what’s at stake.”

In addition to getting accustomed to the intensity of a Minor Midget season, playing a year up also taught Clarke a thing or two about approaching the OHL Priority Selection.

“I learned a lot from being an underage player in the League last year.  One of the most important things that I learned is to not get caught up in draft talk and to just play your own game.  Control the controllable.”

The OHL Cup powered by Under Armour runs March 14-20 at Scotiabank Pond. The finals on March 20 will be held at Mattamy Athletic Centre. Click here for a full schedule.

covid19
The Survey Results Are In
7 days ago