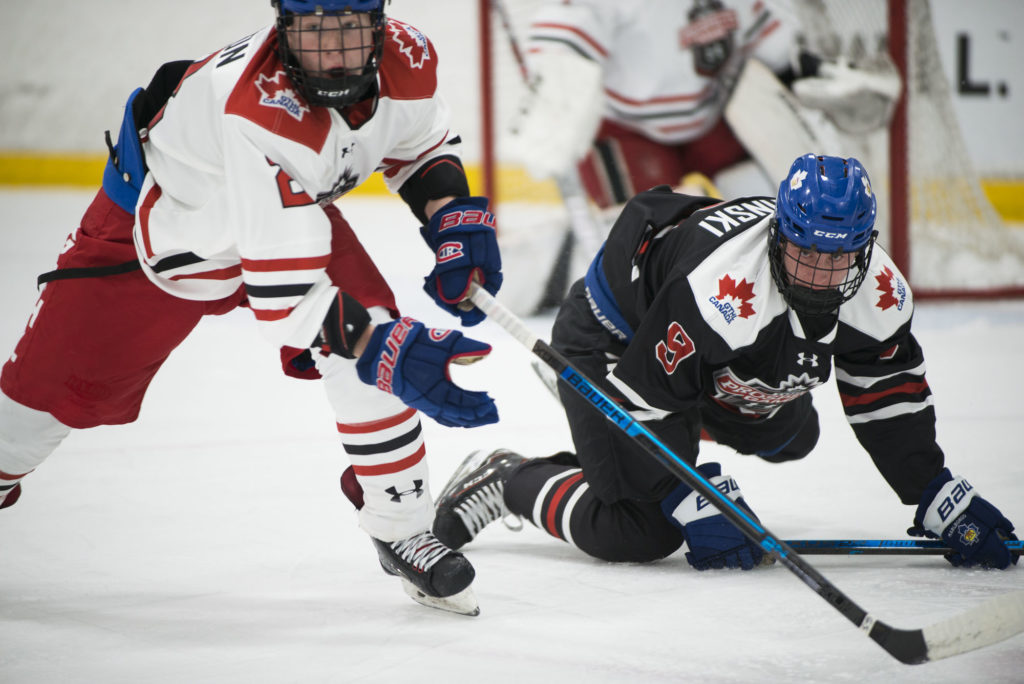 Sitting in Sixteen Mile Area in Oakville, Jr. Canadiens defensemen Ty Nelson watched as World Junior Championship hopefuls, some only a mere two years his senior, compete for their chance to represent Canada at the 2020 tournament in Czech Republic. It was a mere two days following Nelson’s appearance at the 2019 GTHL Top Prospects Game, Powered by Under Armour where he competed in front of a sold out crowd, but Nelson was about to receive an intermission phone call that would elevate his mood even higher.

“We received a call from Calgary and it was Benoit Roy from Hockey Canada, congratulating me on my acceptance to the Youth Olympic Winter Games team,” explained Nelson. “My initial reaction was the biggest smile I have ever displayed and I also have to admit that it brought tears to my eyes because playing for Canada and representing Canada has always been a life long dream of mine.”

A dream had by many players in the GTHL, Nelson will be joined by teammate Pano Fimis as well as Toronto Marlboros’ Paul Ludwinski and Matthew Jovanovic, as four of 17 players selected from across the country. Fimis, who had just won MVP of Team Stacey-Primeau-Tucker at the Prospects Game the night previous, was still reeling from the excitement of the previous night when he got the call from Calgary.

“I was at home in my room trying to do homework, but I was really just thinking about the game from the night before and what an amazing experience that was,” explained Fimis. “I’m looking forward to everything involved with the opportunity itself. Being part of the team, staying in the village, meeting other athletes from all over the world, watching other events and most of all trying to win a gold medal for our country.”

Held in Lausanne, Switzerland, Canada will kick-off competition on January 18, 2020 against Russia. With bringing home gold in mind, Toronto Marlboros forward Paul Ludwinski emphasizes the importance of sticking to routine heading into the tournament.

“I’m going to continue to work hard on and off the ice to improve upon my game,” said Ludwinski. “Eat well and try and stay healthy so I can help Canada bring back a gold medal.”