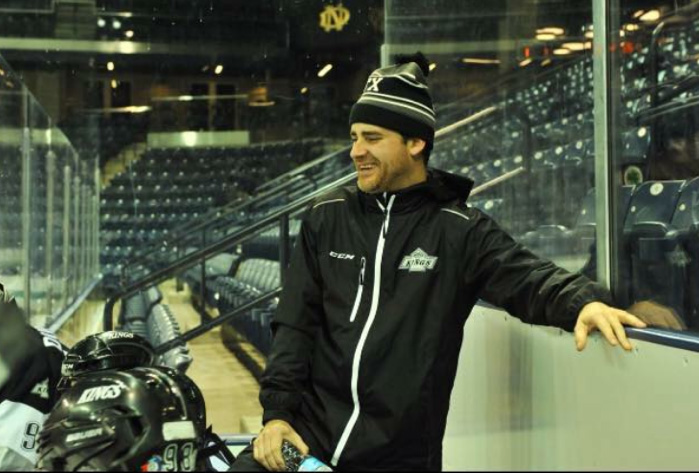 Moyer’s playing career began at the age of 4. From there, hockey led him to stints in Junior A, third division NCAA, and overseas to Germany. His passion for the game has given him the tools to succeed as a coach in the GTHL.

“I was tapped out as a player,” Moyer said. “I still loved the game and loved being around it. I was a student of the game and always questioned coaches as a player, so I always thought, ‘you know what maybe this is for me’.”

Since the decision to take on coaching, the now 10-year coaching veteran hasn’t looked back. Moyer continues to stick with the philosophies he held when he started his coaching journey.

“Development first. Getting the players to play the right way as individuals and as far as the team concept,” he said. “I believe playing the right way allows for successful team results at the end of the day. I’m not a win at all cost type of coach. I’d rather go into the dressing room after a game knowing all 17 of my players were all part of it.”

“Learning that not every athlete is the same,” he said.“If you treat everyone in their own way as individuals, the whole team concept sort of naturally grabs itself together.”

At the end of the day, seeing his players succeed is the greatest reward.

“I’ve had the opportunity of coaching players that have moved on to the Ontario Hockey League and it’s very satisfying,” said Moyer.“Seeing kids move on, not only hockey-wise but academically as well. Running into kids eight or nine years after I’ve coached them knowing that they are successful is something that I really appreciate.”

As for new coaches, or parents thinking about getting into coaching, Moyer gives some advice to those who look to take on the challenge of being the bench boss.

Beau Moyer and the Vaughan Kings are set to take on the Toronto Marlboros in the second round of the Scotiabank GTHL Playoffs. Their first round win against the Mississauga Reps has guaranteed them a spot in the 2017 OHL Cup.