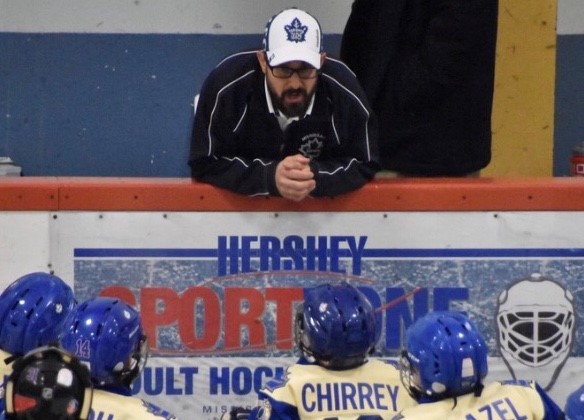 Coach of the Month, Presented by the Coaches Site: James De Santo
December 15, 2018
coach of the month development

There is no other coach that Adam Chirrey rather play for than Mississauga Terriers Minor Peewee “AA” Head Coach James De Santo.

“Coach James has been my coach for the past four years and I’ve enjoyed every minute of it,” said Chirrey. “Coach James knows his hockey, but more importantly, he knows how to treat us kids.”

Growing up as a minor hockey player in the MTHL, James De Santo had similar experiences to Adam when it came to his coaches. Beyond the championship victories on the ice, the most memorable minor hockey moments for De Santo involved the leadership displayed by his coaches.

“My coaches had a huge influence on me,” explained De Santo, who has been coaching at various levels since 1997. “I am hoping I can do the same through my coaching. Players have to enjoy and remember the journey and not just the result.”

De Santo’s methods have morphed the Minor Peewee Terriers into a skilled and motivated team both on and off the ice. Chirrey explains that the team has seen recent success in both the regular season and various tournaments. Chirrey’s teammate Michael Ayerst credits De Santo’s positive approach to the Terriers impressive on-ice performance this season.

“He makes us want to work hard and win games, “explained Ayerst. “He makes practices and games fun. He plans great activities on and off the ice. For example, our team watched ‘Miracle’ this past weekend as we are going to Lake Placid next week.”

As a parent coach, De Santo sees coaching as an opportunity to influence both his own children as well as others to influence them to be better at what they do.

“My motto on all my teams is to be the ‘hardest working team in the league’ and by doing this – good things will happen.  This is true in hockey and life.”

The Minor Peewee “AA” Mississauga Terriers currently sit first in their division with a 16-1-3 record on the season.

James has been named Coach of the Month for December. He will be awarded with a prize pack courtesy of the Coaches Site. Click here to nominate your coach now.