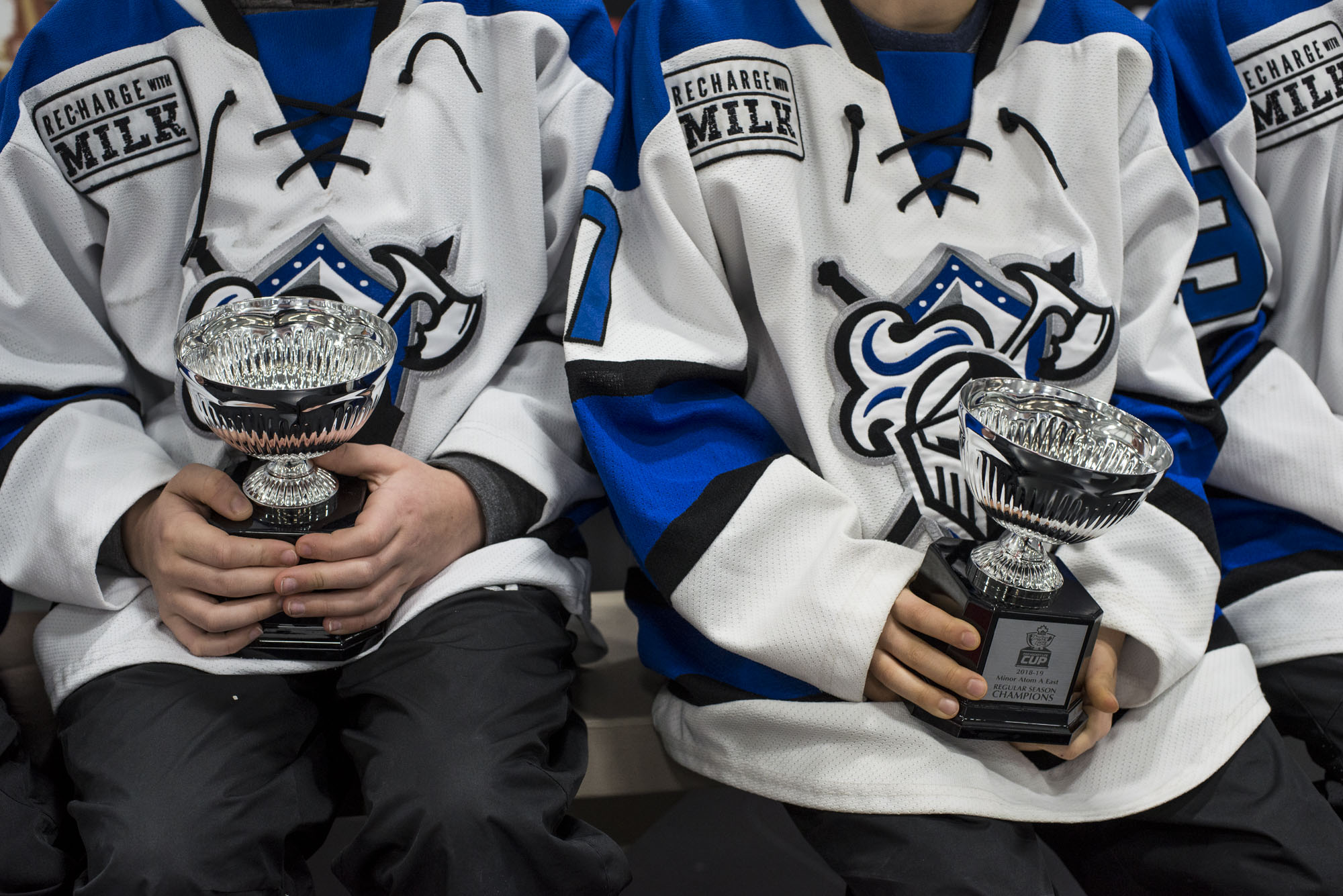 Atom
West: The Vaughan Rangers captured a Pro Hockey Life Cup with ease as the top-seeded team in the West, but when it came to the post-season, the Rangers encountered difficulties. Sweeping the Mississauga Terriers in the first round, the Rangers were then swept by the fifth-place Mississauga Beast. The Beast got a taste of their own medicine in the West final, falling in four games to the second place Mississauga Jets. Expect the Rangers to start the season with something to prove.

East: There was no match for the Scarborough Young Bruins who started their Minor Atom season as the talk of the loop. The Bruins would lose only two games during the regular season, earning them a Pro Hockey Life Cup. Their dominance would continue all the way to the Scotiabank GTHL Playoffs final, where they defeated the Mississauga Jets in six games. Will the Bruins continue to be the team to beat?

Minor Peewee
West: One game decided by one goal would earn the Mississauga Jets their second consecutive Pro Hockey Life Cup. The playoffs would prove to be a different story, with both the Jets and second-seeded Duffield Devils eliminated in the quarter-finals. The fifth-place Beast would burst into the final against the fired-up Flames, only to lose in six games.

East: The Leaside Flames posted a 2-1-1 record against the Forest Hill Force during the regular season, but failed to finish above the first place Force. With only three points separating the two teams in the regular-season standings, the post-season saw the Flames light it up, working their way to a Scotiabank GTHL Playoff title.

Peewee
West: After narrowly missing out on a Pro Hockey Life Cup during their Atom season, the Mississauga Terriers fended off the defending champs to take the top spot in the West. The Terriers would tear it up all the way to the Scotiabank GTHL Playoff finals, falling to the North York Knights.

East: A 30-3-3 record would earn the North York Knights their third straight Pro Hockey Life Cup title. Unlike their Atom season, the Knights managed to keep the momentum going into the post-season, defeating the first-place Mississauga Terriers in six to claim the title of Scotiabank GTHL Playoff champions.

Minor Bantam
East: The Toronto Shamrocks were suffering from deja vu during their Peewee season. While the Shamrocks repeated as Pro Hockey Life Cup champs, but would once again fall to the Tigers in the Scotiabank GTHL Playoff Finals. Expect the Shamrocks to be hungry come the 2019-20 post-season.

West: No strangers to winning, the Streetsville Tigers managed to capture their third straight Pro Hockey Life Cup in 2018-19. The team took their talent all the way to the OHF Championships, where they earned the title of Provincial Champs. The Tigers had no trouble getting to the provincial level, nearly sweeping almost every series in the Scotiabank GTHL Playoffs.

Bantam
West: Finishing in second place during their Peewee season, the Vaughan Rangers used just falling short as a motivator to finish on top last season. The Rangers captured the Pro Hockey Life Cup, but would fall victim to an upset by the Greater Toronto Capitals in the playoffs.  The second-seeded Mississauga North Stars were privy to a deep playoff run after defeating the Capitals in the semi-finals.

East: The North York Knights have been a team to be reckoned with since their Minor Atom season. The team clinched their fifth consecutive Pro Hockey Life Cup and followed it up with their second straight Scotiabank GTHL Playoff title. The second-place Goulding Park Rangers would take the Knights managed to take the Knights to five games – the most of any team in the East’s post-season.

Minor Midget
West: With three straight Pro Hockey Life Cups and capturing every Scotiabank GTHL Playoff title since Peewee, the Vaughan Rangers will no doubt once again be the team to beat. Sweeping two teams in the post-season, the Rangers took the second-seeded Leaside Flames to five games before clinching another championship.

East: After narrowly missing out on a Pro Hockey Life Cup during the 2017-18 campaign, the Scarborough Young Bruins managed to finish the job during their Bantam season, posting an impressive 29-2-5 record.  The playoffs would prove to be a different story for the Bruins, who were defeated by the Leaside Flames in seven games in the semi-finals. The Flames would miss out on a Scotiabank GTHL Playoff championship, falling to the Vaughan Rangers in six.

Midget Junior
West: There was no stopping the Minor Midget Mississauga Terriers during the 2018-19 season. While the second place Mississauga North Stars came close, they still were not able to get past the Pro Hockey Life Cup-winning Terriers during the regular season. The Terriers played their way to the Scotiabank GTHL Playoff finals where they swept a strong Goulding Park Rangers team to clinch the title.

East: No team close to the Goulding Park Rangers who dominated the East with a 24-6-6 record on the season. The post-season would also belong to the Rangers, that is until they met the Terriers form the West. The Rangers would end their season being swept by the Terriers in the Scotiabank GTHL Playoff finals.

Midget
Competition will be tighter than ever with East and West merging into one division. Both the Pro Hockey Life Cup winning Vaughan Panthers and Hillcrest Canadiens will return to the loop, while a new champion will be crowned in the playoffs with the Streetsville Tigers not returning for a Midget season.