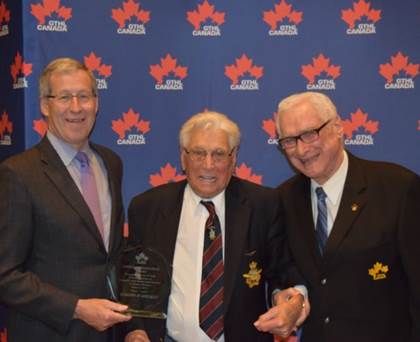 Every September, without fail, the GTHL season begins. For several months early morning practices, weekend tournaments and arena coffee make up the lives of families across the GTA. By the time June rolls around, the focus has shifted to summer and often to other sports.

The start of June also signifies a time of tradition, as the GTHL hosts its annual Awards Celebration to recognize the achievements of its most outstanding members.

Representatives from all of the League’s organizations were on hand Wednesday at the Toronto Airport Marriott Hotel to celebrate a group that included players, teams, volunteers and officials. They also honoured 2015-16 Kraft Cup, Scotiabank Playoffs and OHF champions, with special recognition for the North York Rangers who won their first TELUS Cup national Midget AAA championship.

Perhaps the most prestigious accolade of the evening was presented to Joseph D’Angelo, who received the Cooper Humanitarian Award for his service to minor hockey, particularly in the Don Mills community. D’Angelo, 93, was quite poetic while accepting his award, saying that working with youth serves to keep us all young.

Therein lies the beauty of our game – it provides kids the opportunity to improve as players and people, and allows many more to take an active role in their community.

Now that’s something to celebrate.

A complete list of awards winners is included below. Click each name to learn more about their achievements.